# Stag-cation: The Stagnation of Supplemental Benefits

In the course of four decades supplemental benefits, or non-wage compensation, paid to employees grew from 6.96% of wages in 1950 to 17.96% in 1990. This sharp increase amounts to a 258% surge, which translates to roughly 6.5% per annum. With little deviation, the initial rate of wage supplementation was the factor by which that value increased each year.

# Overview: Growth in Wages and Benefits 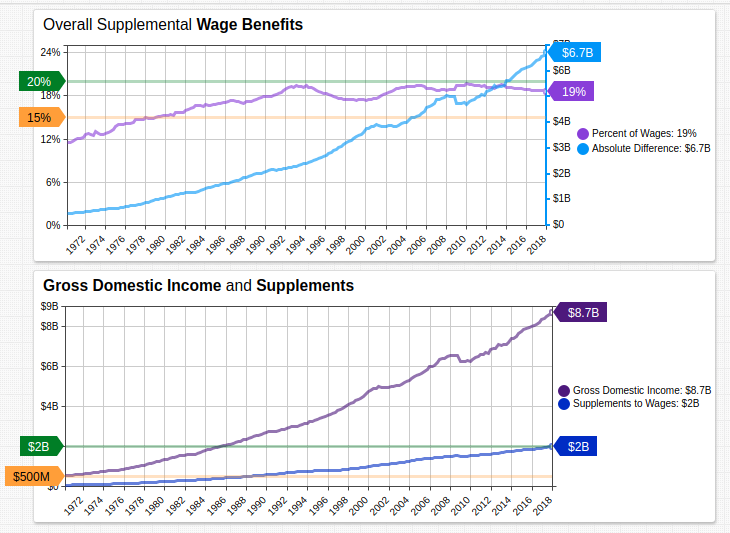 Stagflation is the economic phenomena which arises during intervals of high interest and low economic output. The result is a precarious situation where policymaker intervention can exacerbate the synchronous problem of high unemployment by any action which is pursued. Stag-cation (a portmanteau of stagnant and vacation) is a phenomena currently being evinced in the United States whereby the relative amount of non-wage benefits to employs is no longer growing at a meaningful rate.

Whereas wages continue to nominally rise, the percent of supplemental benefits, like those mentioned above, has reached a plateau.

# Effectively Zero: Benefit Growth Does Not Exceed One Percent

The advent of computing technology has eliminated literal billions of man-hours in the modern information era. Yet despite overall increases in wages, albeit mostly commensurate with inflation, huge leaps in time-saving technology have not created the idyllic, but evidently chimerical, 15-hour workweek envisioned by Keynes in 1930.

The lower left Time Chart highlights periods of negative growth for each derived metric in red and the Text Widget tracks the rate of the change for the defined interval.

# Measurable Differences: A Widening Gap in Wage and Benefit Growth 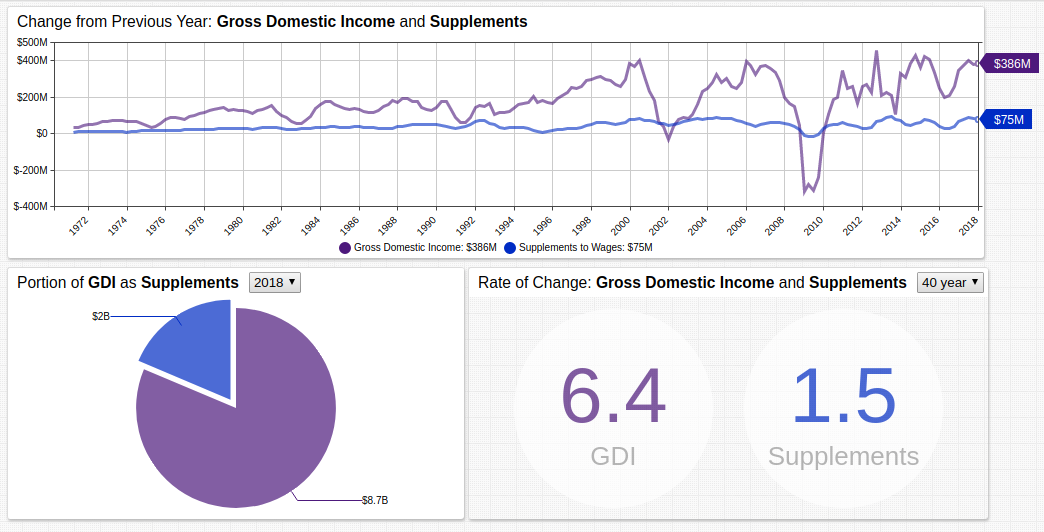 Compare the absolute change, proportional relationship, and rate of change for wages and supplements. Although wage growth was negative numerous time throughout the observed period, the 40-year rate of change is four times that of supplemental benefits.

The drop-down list in the Pie Chart controls the start-time of the one-year aggregation period of wages compared to supplements, navigating through time demonstrates that the proportion of supplemental benefits to overall wages has changed very little in the last four decades. The drop-down list in the Text Widget controls the interval of aggregation to compare the rates of change for the two metrics.

# Conclusion: The Benefit of Benefits

The table below combines data tracking population, the minimum number of vacation days companies are required to provide for their employees, whether parental leave* is provided by law, and per capita GDP by country.

* Parental leave is defined as at least 30 days at 50% remuneration guaranteed by the employer for either parent, meaning available to both.

Of all countries tracked in the chart above, the United States is the only nation with neither a mandated minimum number of paid vacation days, nor a guaranteed amount of paternal leave for either parent. Despite being among the largest nations in the world and a lack of government-regulated supplementary benefits, the US emerged with the highest per capita GDP.