Analyzing the make-up of foreign-held United States treasuries positions and the effects of large-scale ownership like that of China and Japan on American financial markets. 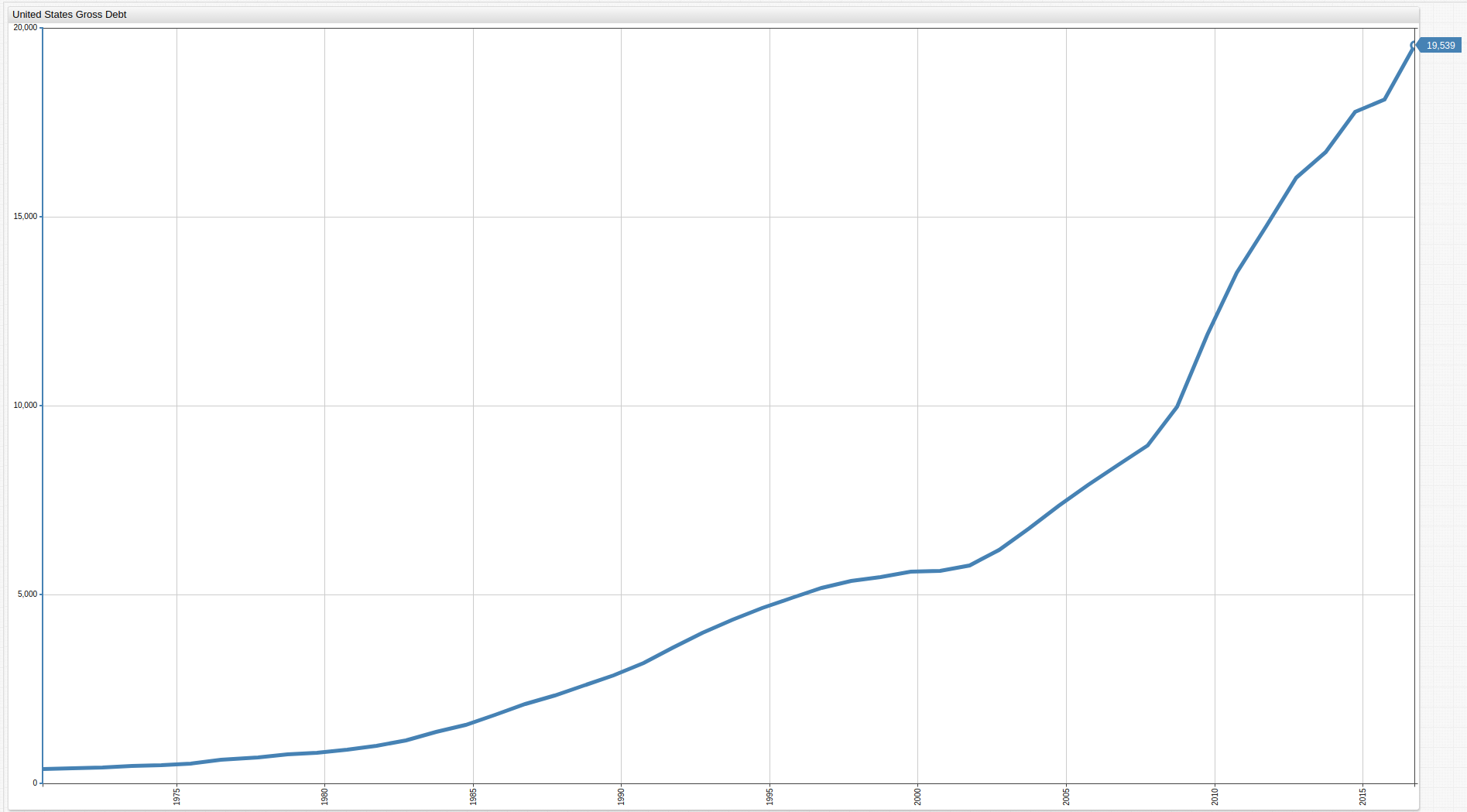 Open any ChartLab visualization and navigate through time with the drop-down list to observe any span of time. 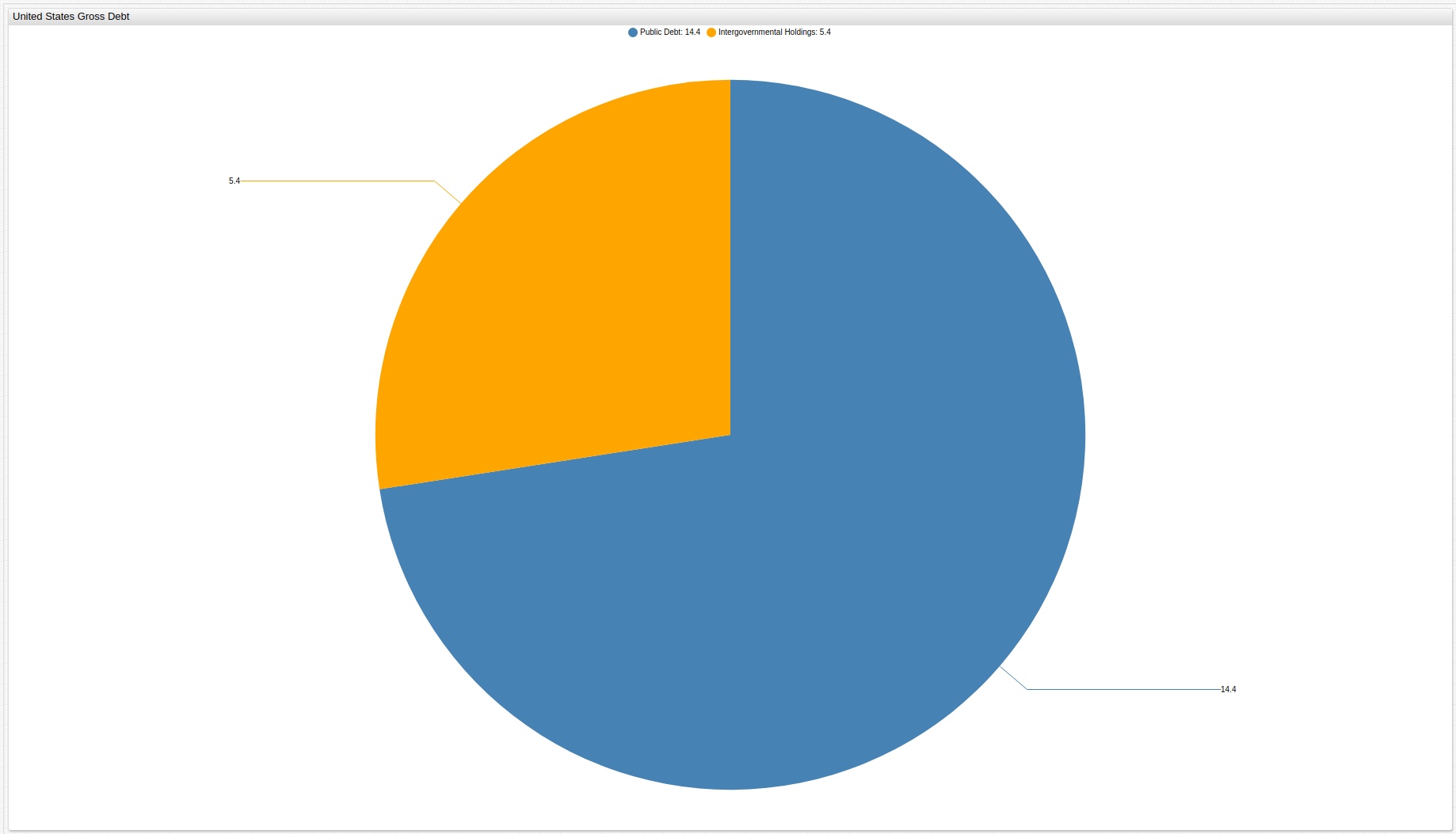 Public debt holdings have been growing in parallel with gross government debt: 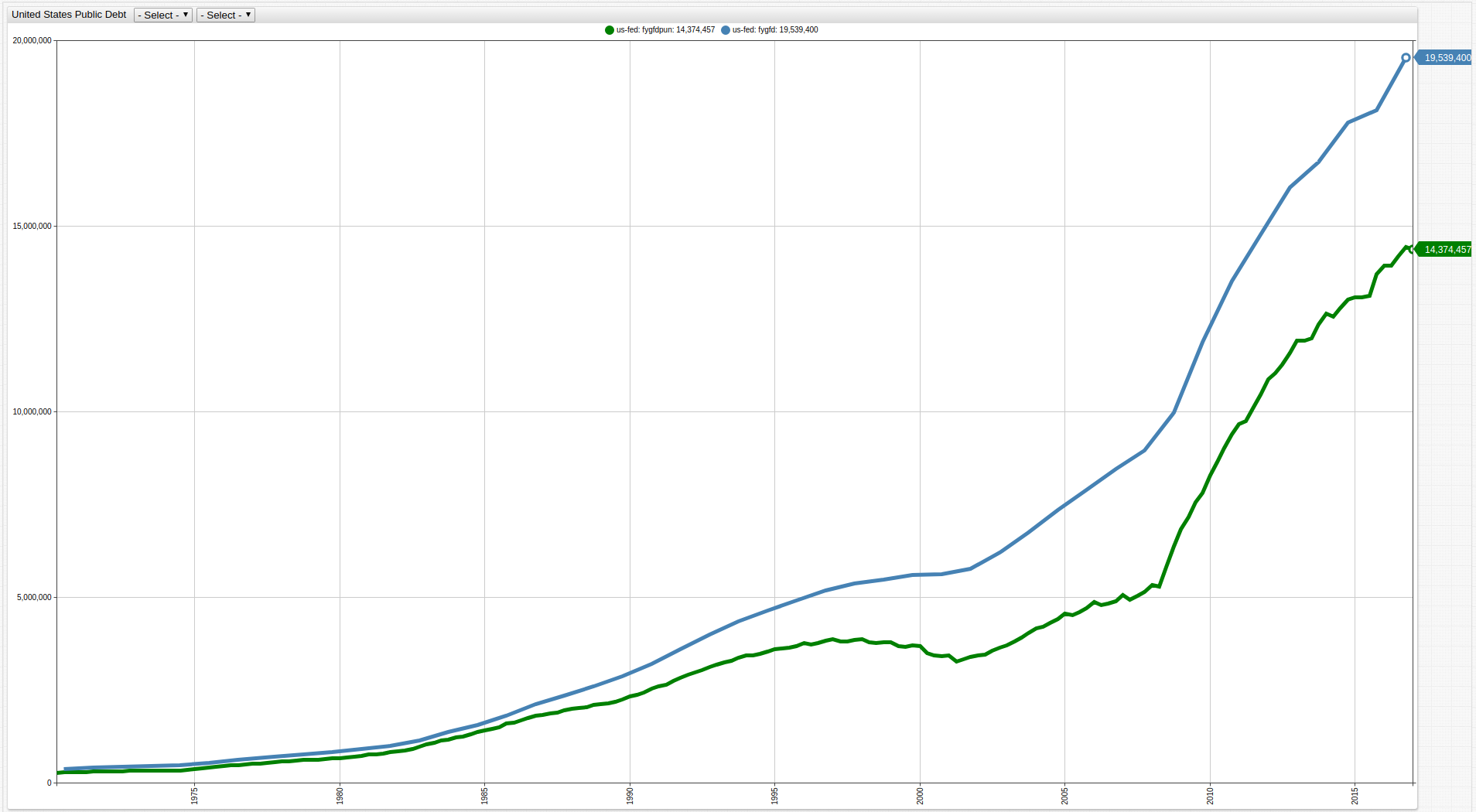 Owners of public debt securities are detailed below: 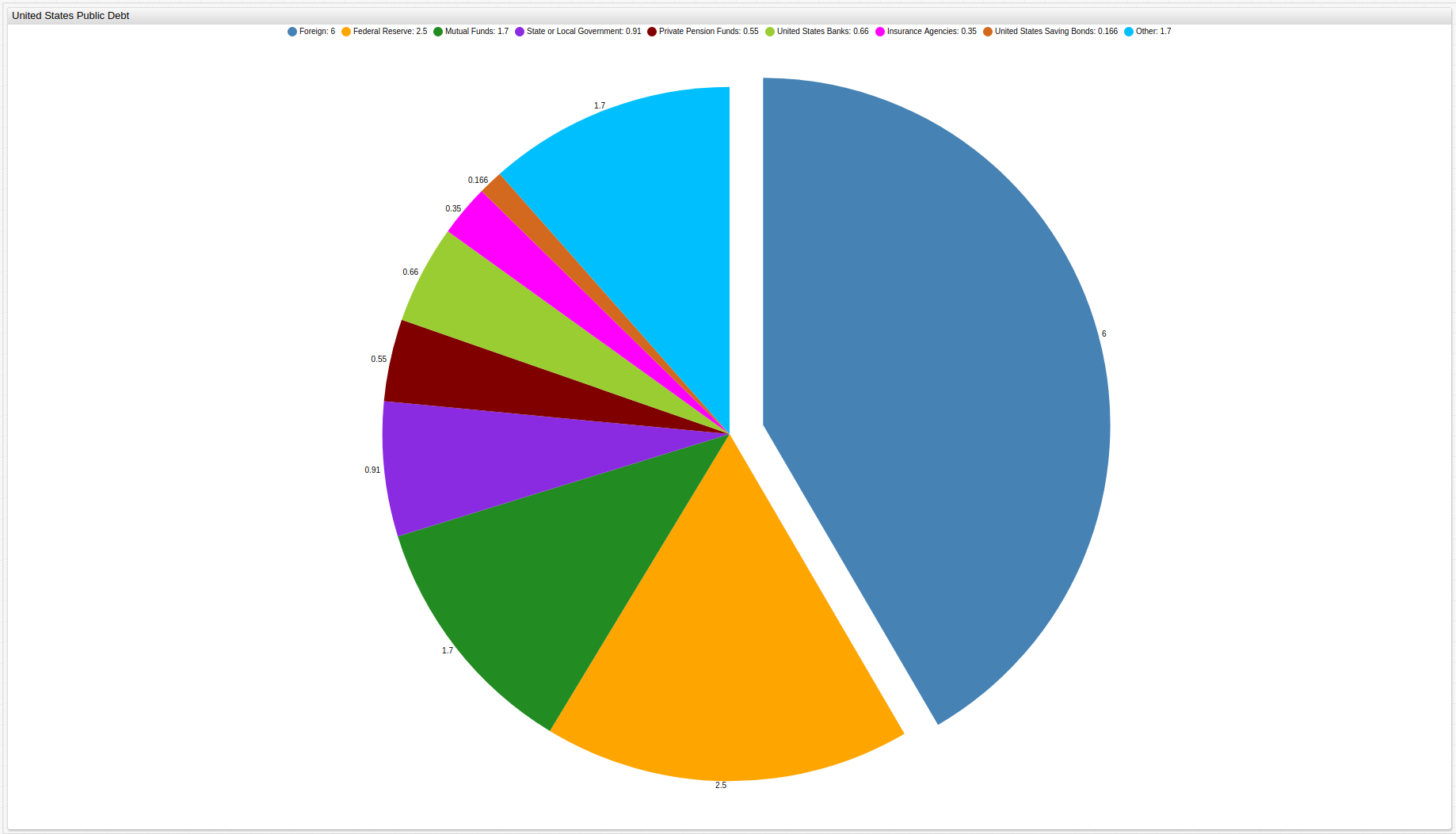 Almost half of the United States gross public debt is held by foreign governments, shown above.

The largest bearers of United States public debt are shown below. Worth noting is the fact that of the six trillion dollars of foreign-held debt, more than two-thirds of that amount is held by the top ten bearers shown in Table 1. 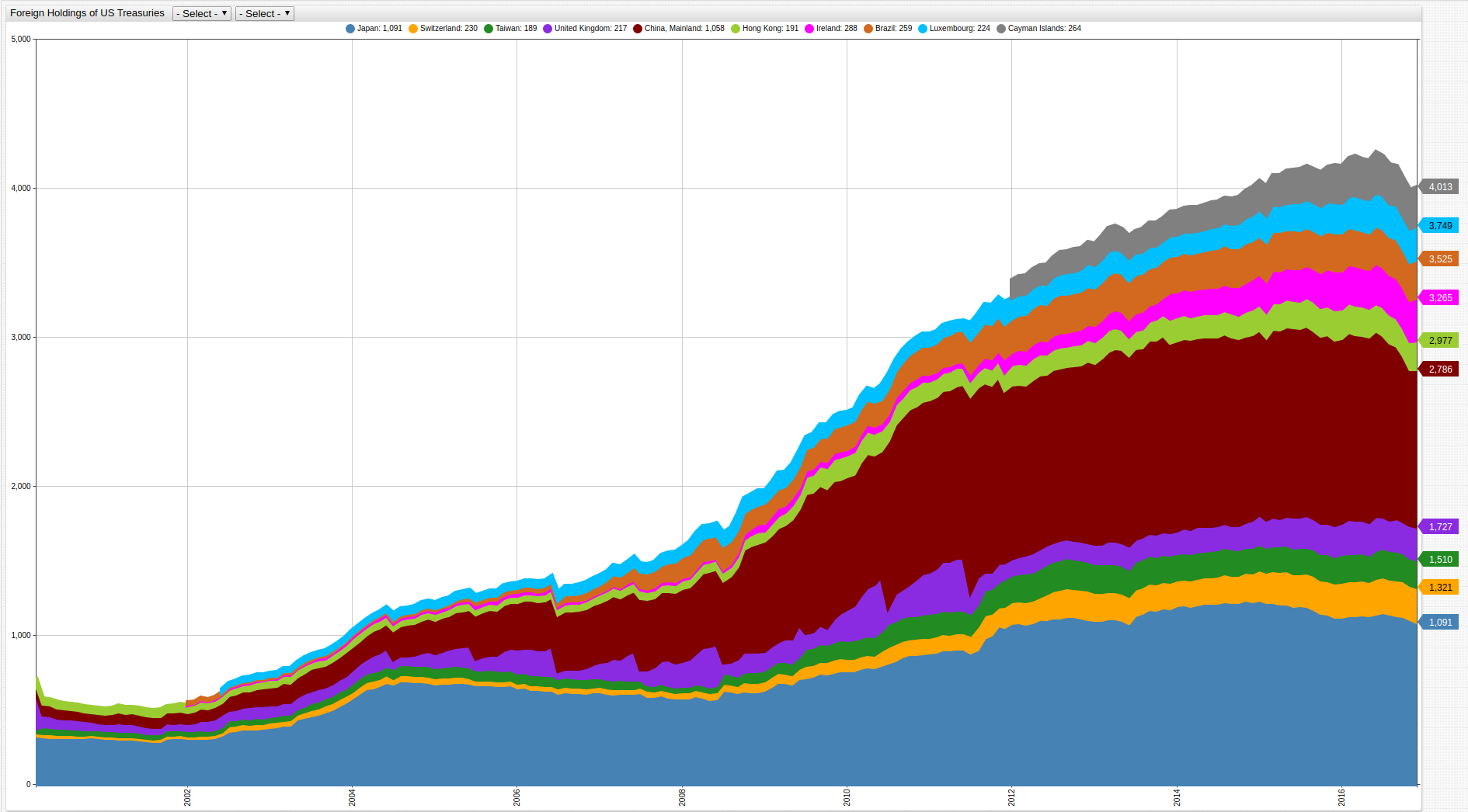 Open any ChartLab visualization and navigate through time with the drop-down list to observe any span of time.

Purchase of public debt by foreign governments has a number of effects. In the case of Mainland China, whose debt positions are detailed below, maintaining a position in United States public debt ensures that the dollar holds its value relative to the Yuan, keeping Chinese imports competitive and affordable on U.S. markets. 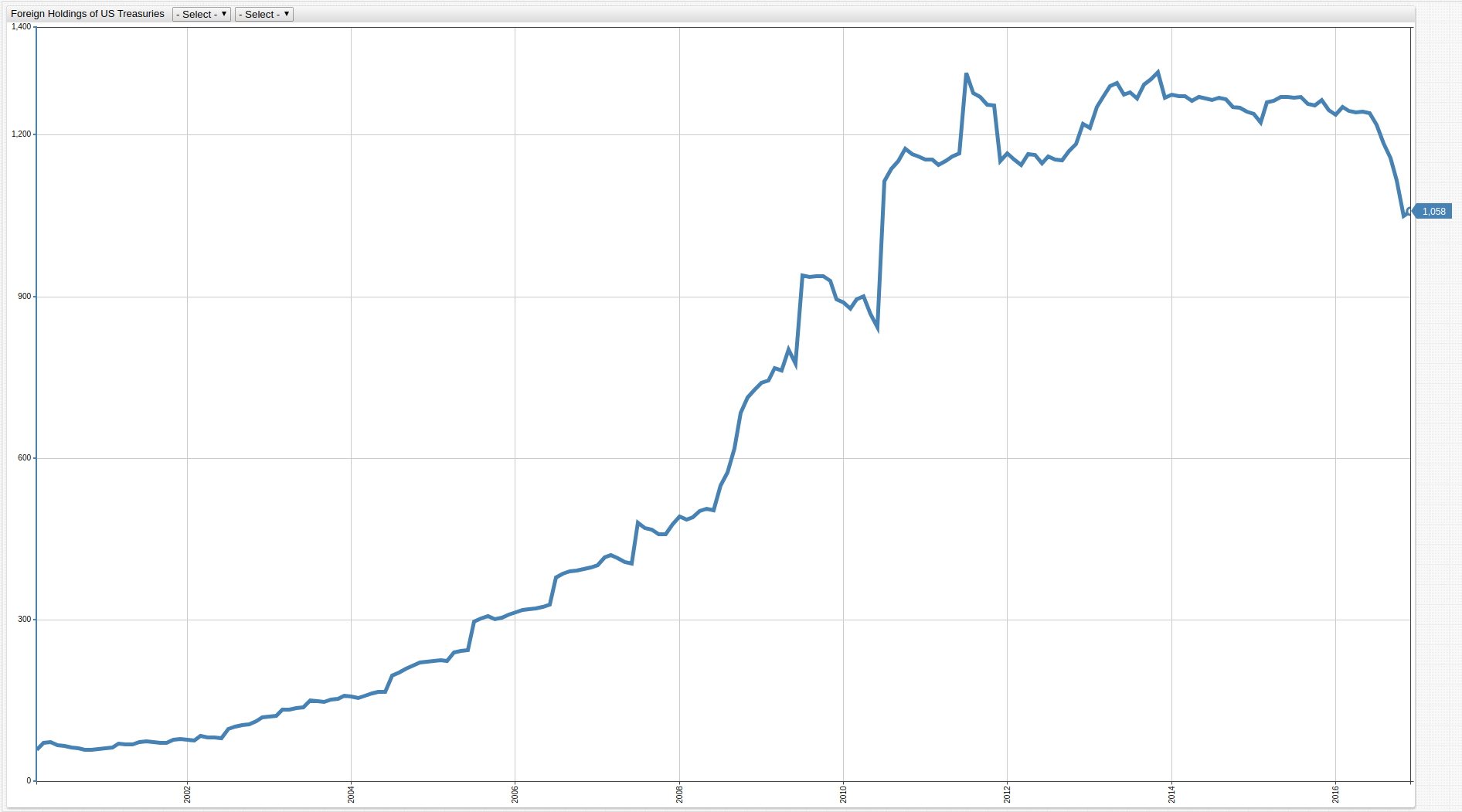 Because U.S. Treasuries are considered one of the safest investments in the world, even countries sometimes considered at odds with United States policy maintain positions in such securities to ensure future returns from the United States economy. The Russian Federation for example, sold a large number of its securities after the downturn in oil prices catalyzed devaluation of the rouble. As the economy stabilized and liquid capital become available, Russia began to reacquire a great deal of U.S. treasuries, shown below: 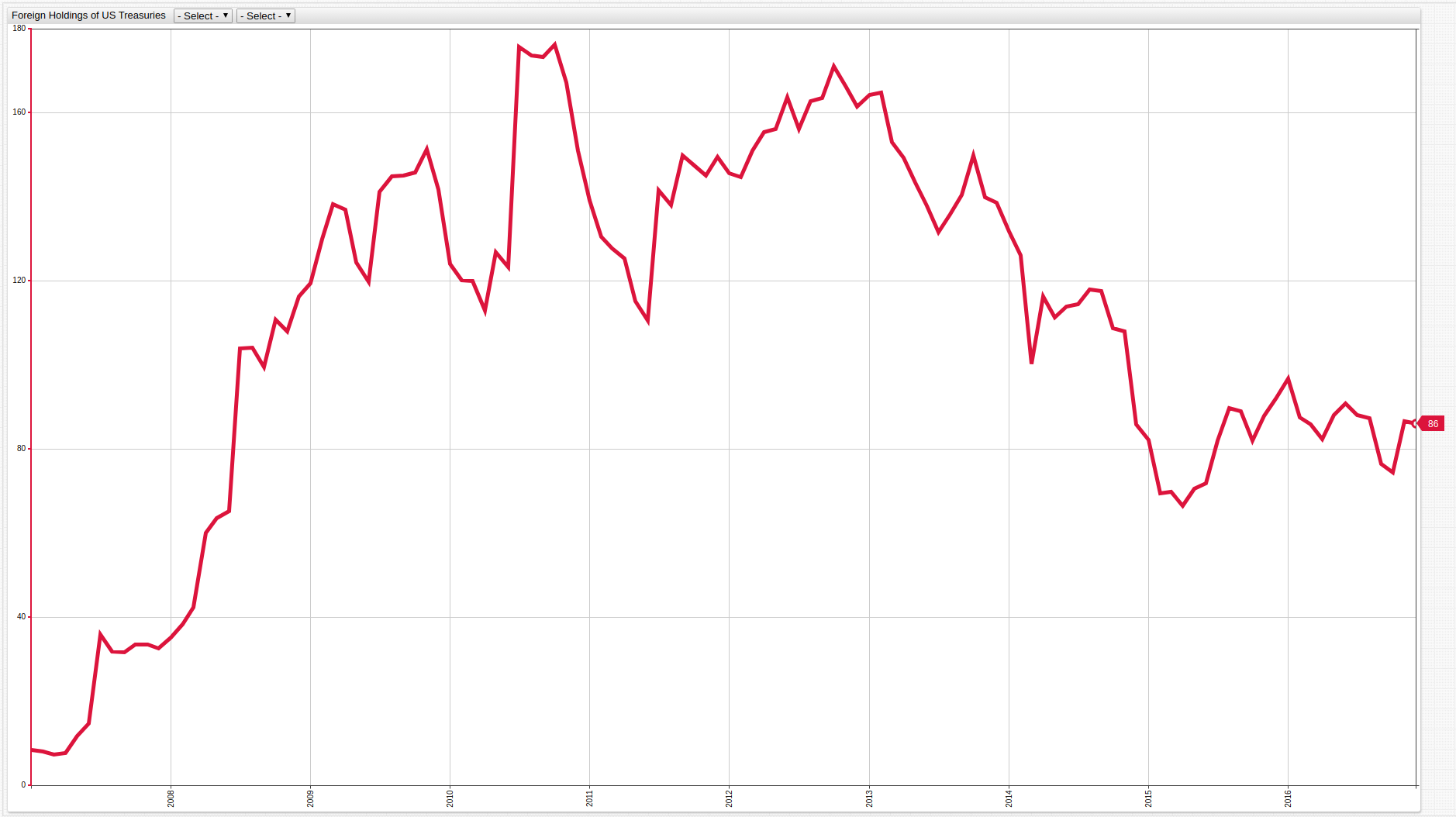 There are a number of financial havens in the world that have lax financial regulation or certain non-disclosure laws that make the true identity of investors impossible to know; examples are Switzerland, the Cayman Islands, Hong Kong, and Luxembourg, all of whom appear in Table 1, they are shown below, alongside Singapore and Taiwan. 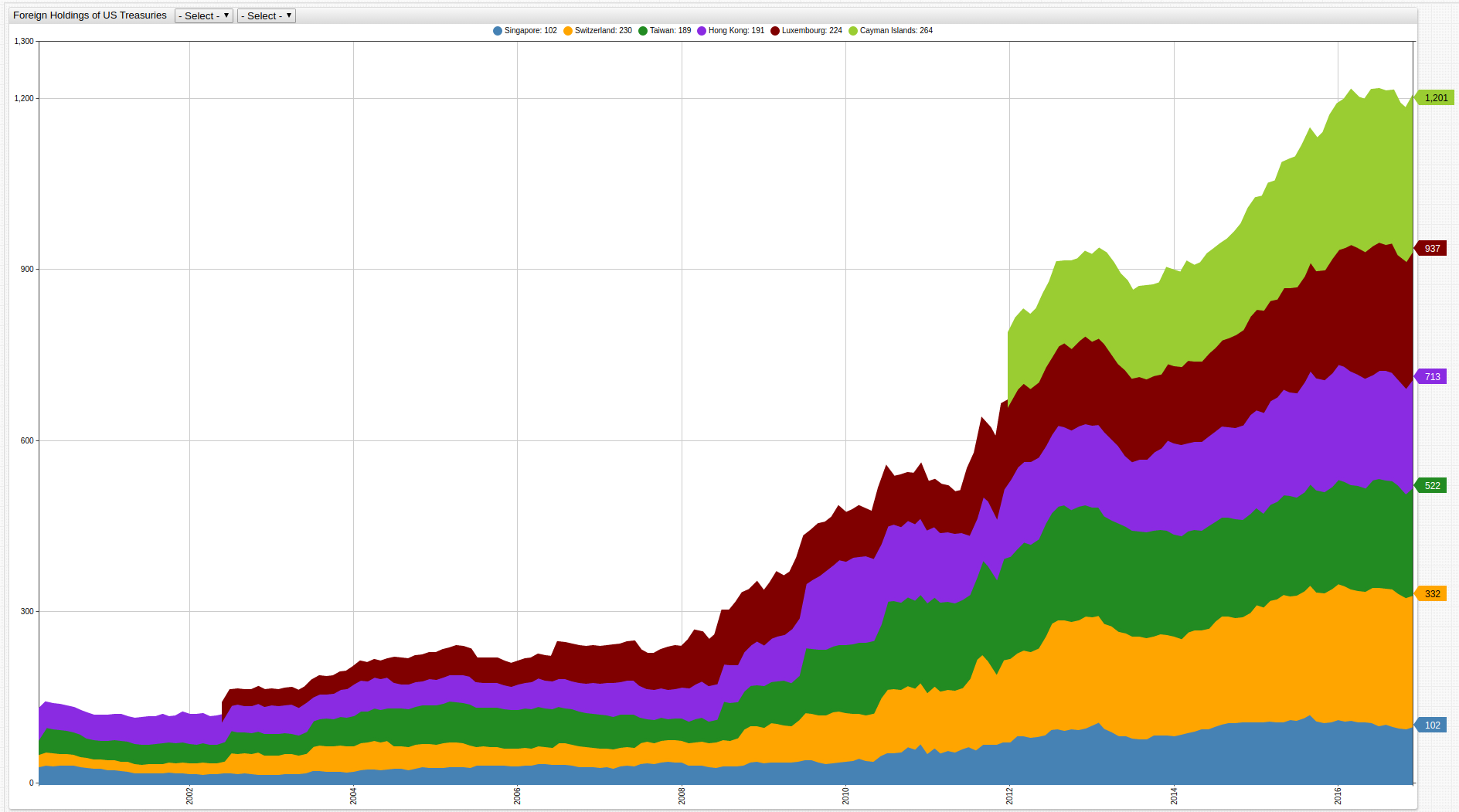 The total treasury holdings by the above sources compared to the People's Republic of China, and Japan, currently the two largest sole bearers of U.S. treasuries are shown below. 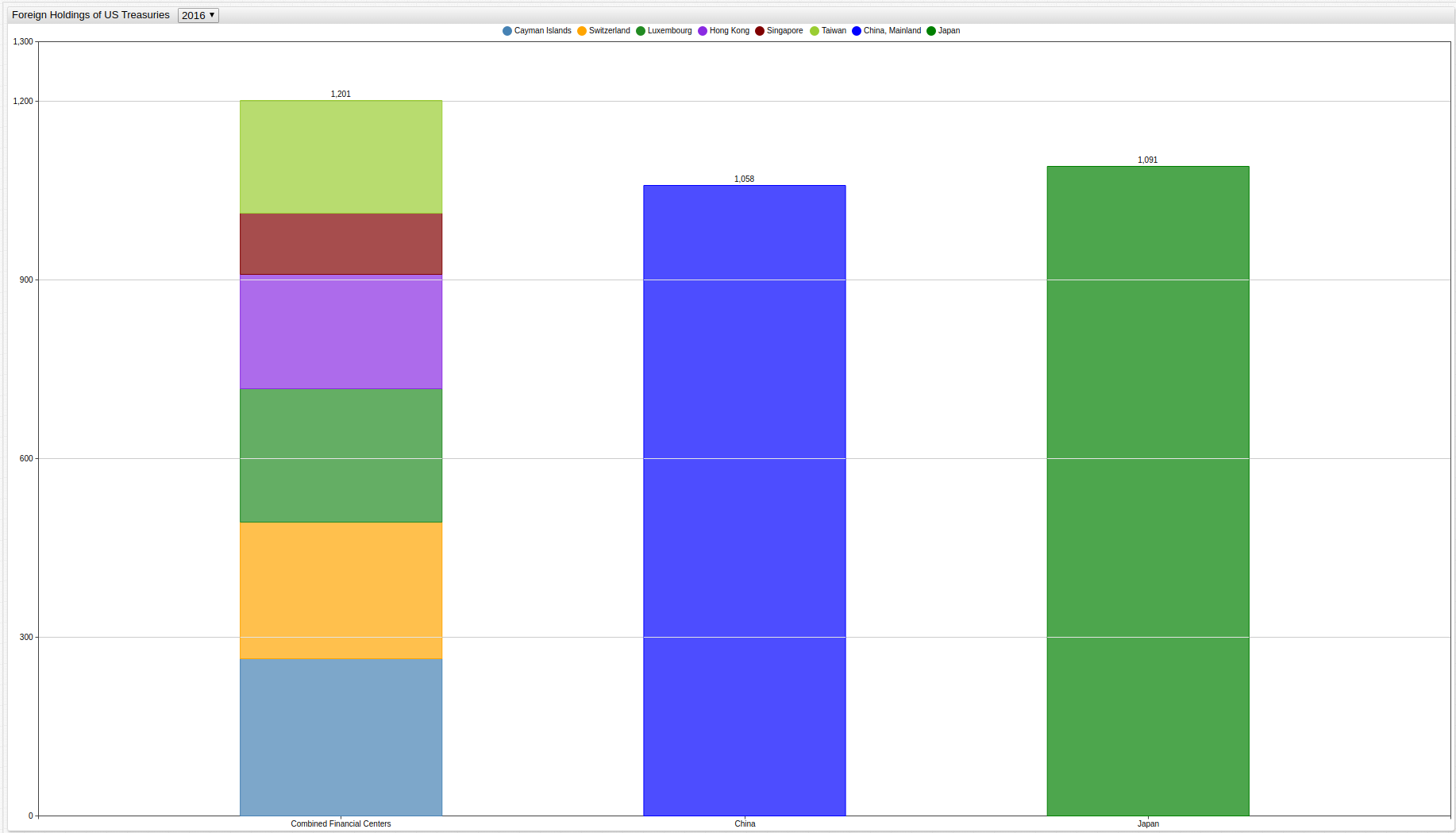 Countries which export oil are central to the global economy, and many of them maintain positions in United States treasuries. 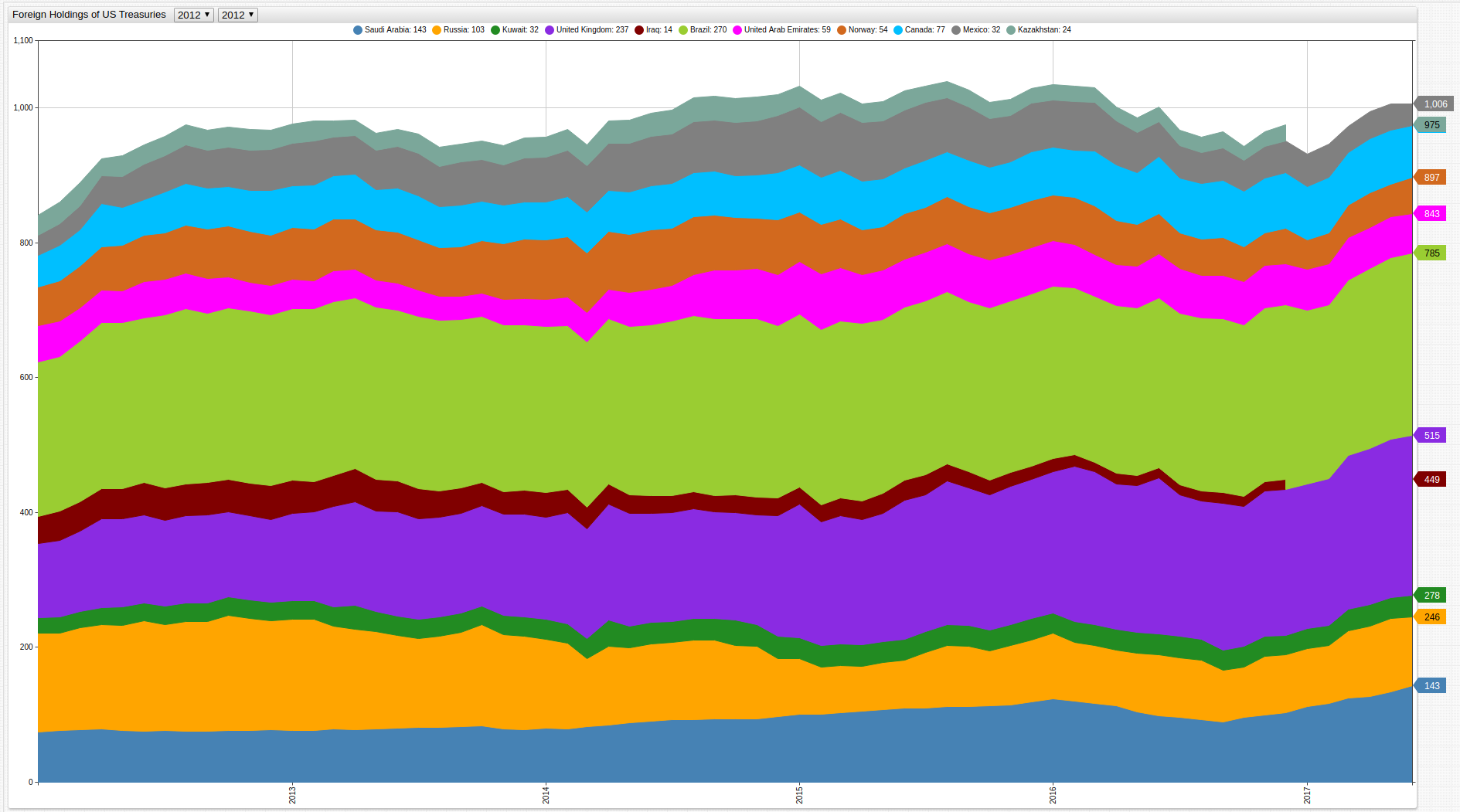 Open any ChartLab visualization and navigate through time with the drop-down list to observe any measured year.

One of the most likely effects of a large-scale sell-off of United States treasuries positions is rapid inflation of the dollar accompanied by increased Federal Reserve interest rates, needed to counteract the sudden influx of such securities on the public marketplace.

Figure 11 below tracks Federal Reserve interest rates by 1-year, 10-year, and 30-year averages and includes the daily Federal Fund rate. For further explanation of these metrics, see this analysis. 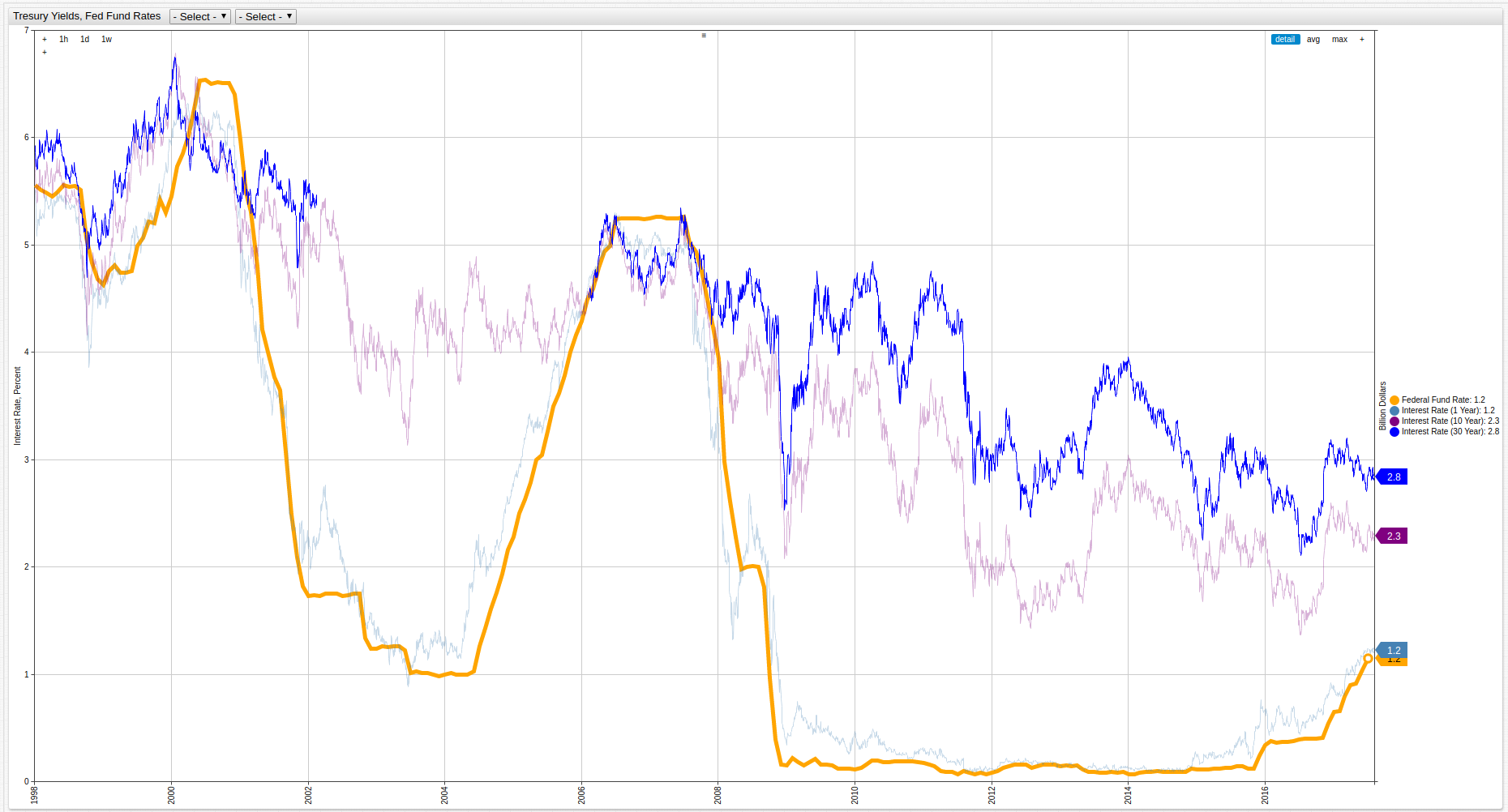 Matched with high levels of foreign-owned U.S. treasuries, low Fed interest rates are viewed with apprehension for fear of rapid inflation caused by the sale of those securities. The following figure shows foreign ownership of U.S. treasuries by China, in total, and less China: 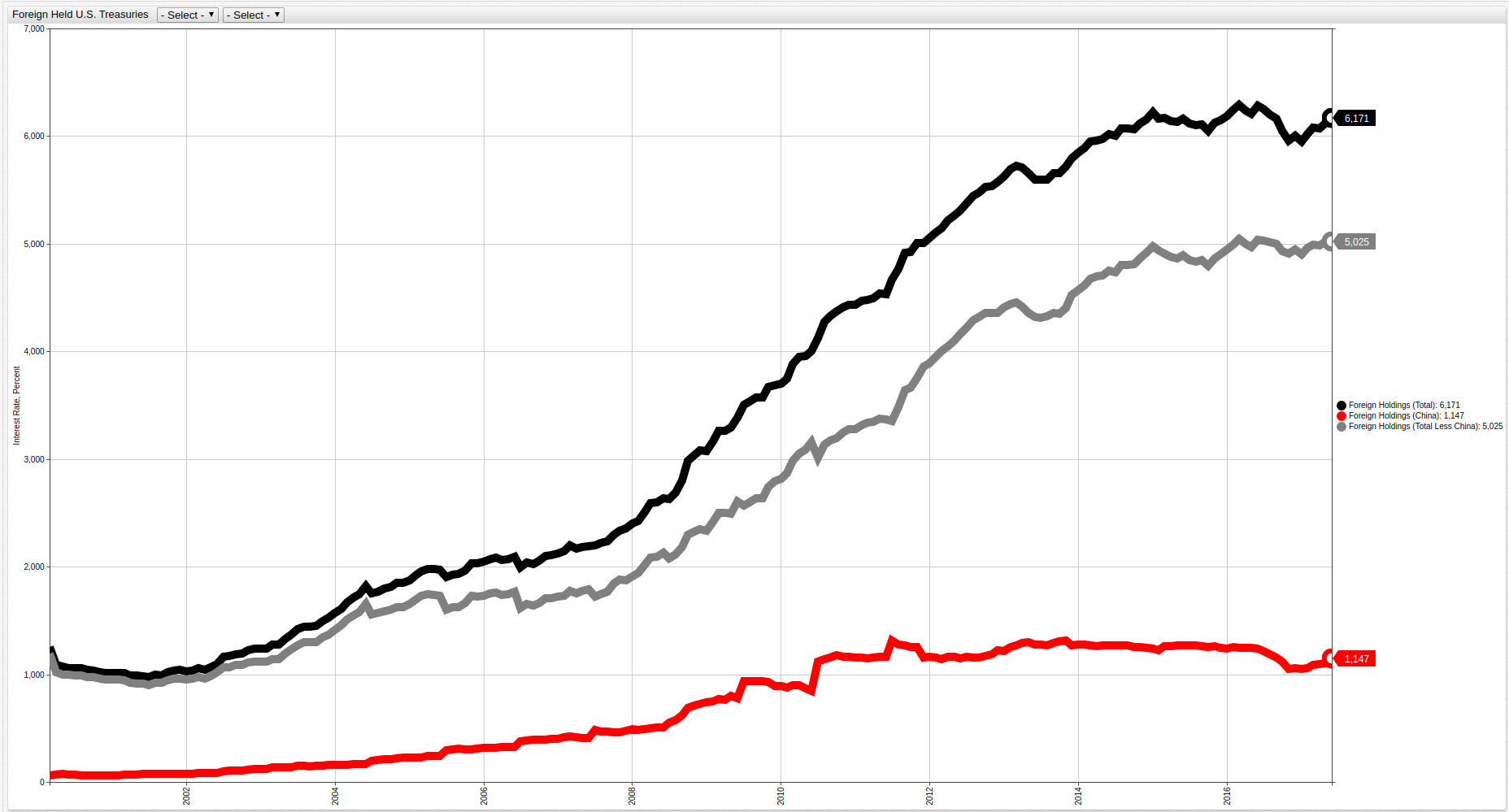 Two unique patterns are visible above. Chinese buying and selling of U.S. treasuries remains stable, indicating no change in position, from 2010 onward. While the second distinct pattern is shown by the black and grey lines and indicates that foreign governments continue to purchase positions in U.S. treasuries. The grey line, which is total ownership less China, resembles the black line more closely then it does the red, indicating Chinese influence over United States markets may be less significant than some analysts indicate.

Additionally, when displayed on an inverted axis with data from Figure 11, the pattern of Fed-set interest rates much more closely follow the trends set by the total foreign-held debt line than the China-held debt line: 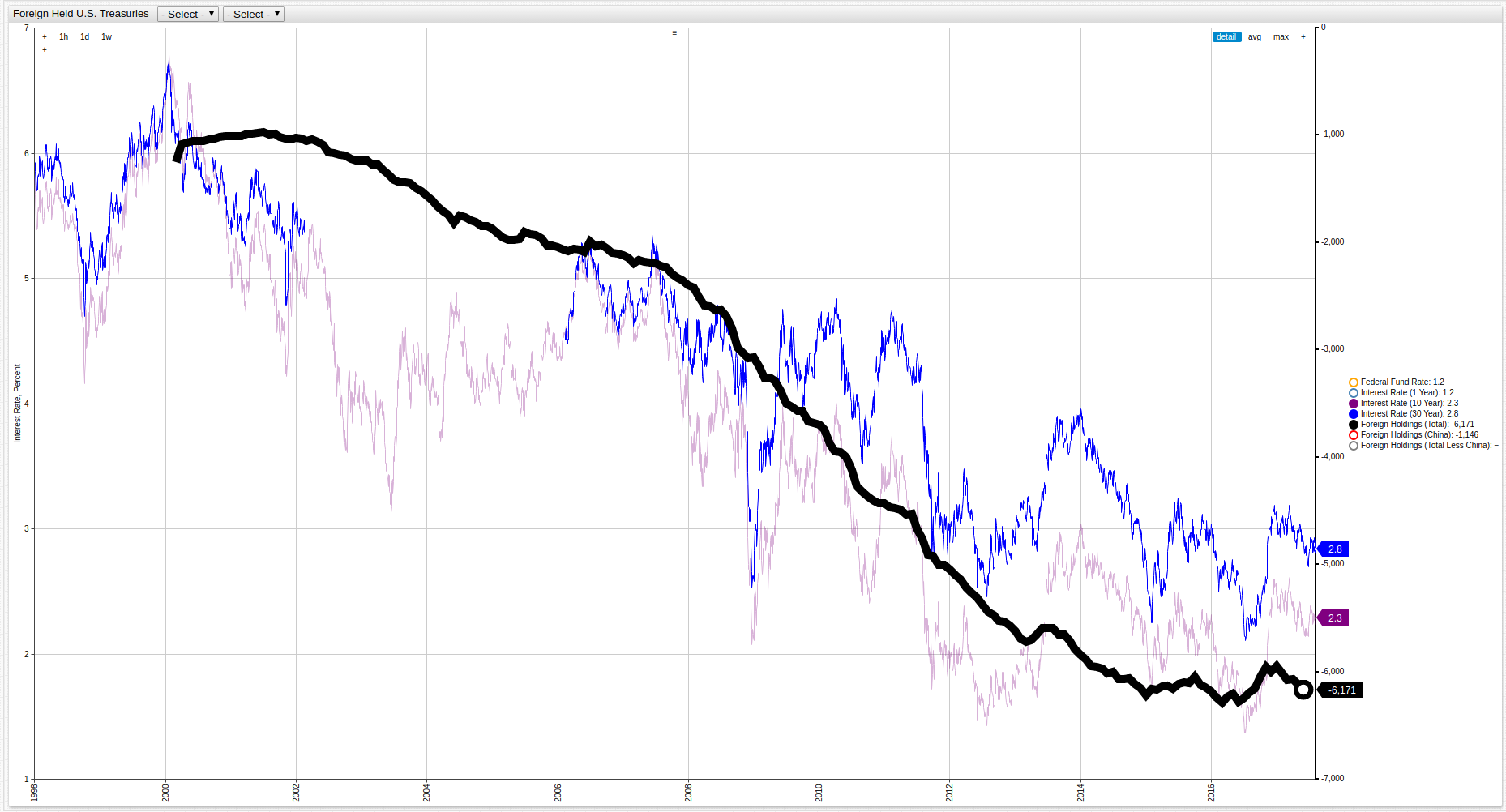 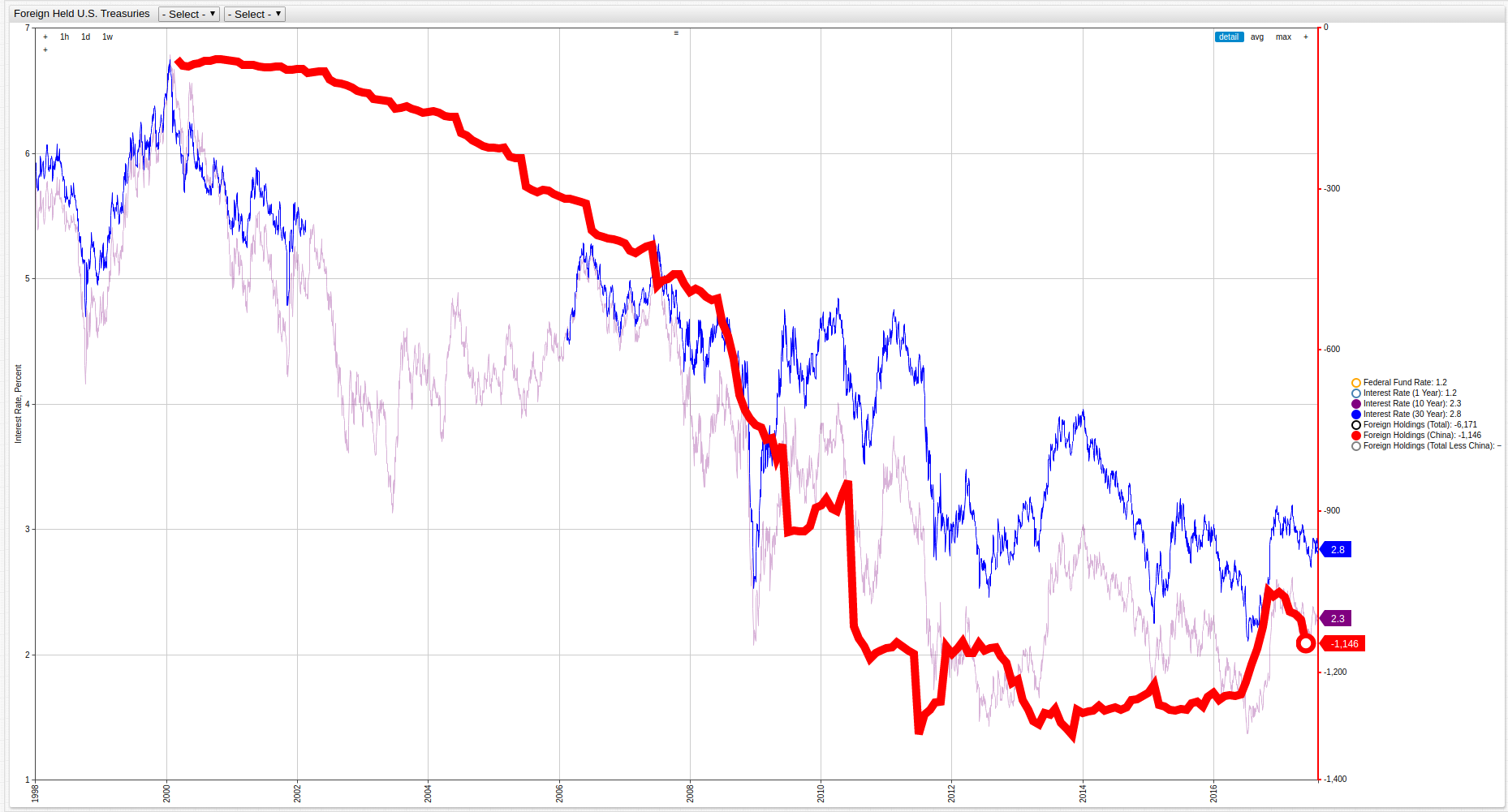 Further, when considering the Federal Fund Rate, which is the daily lending rate set by the Federal Reserve each evening, the relevance of Chinese-held debt movements, which accounts for 5.56% of total U.S. treasuries is shown to be more reactionary than causal: 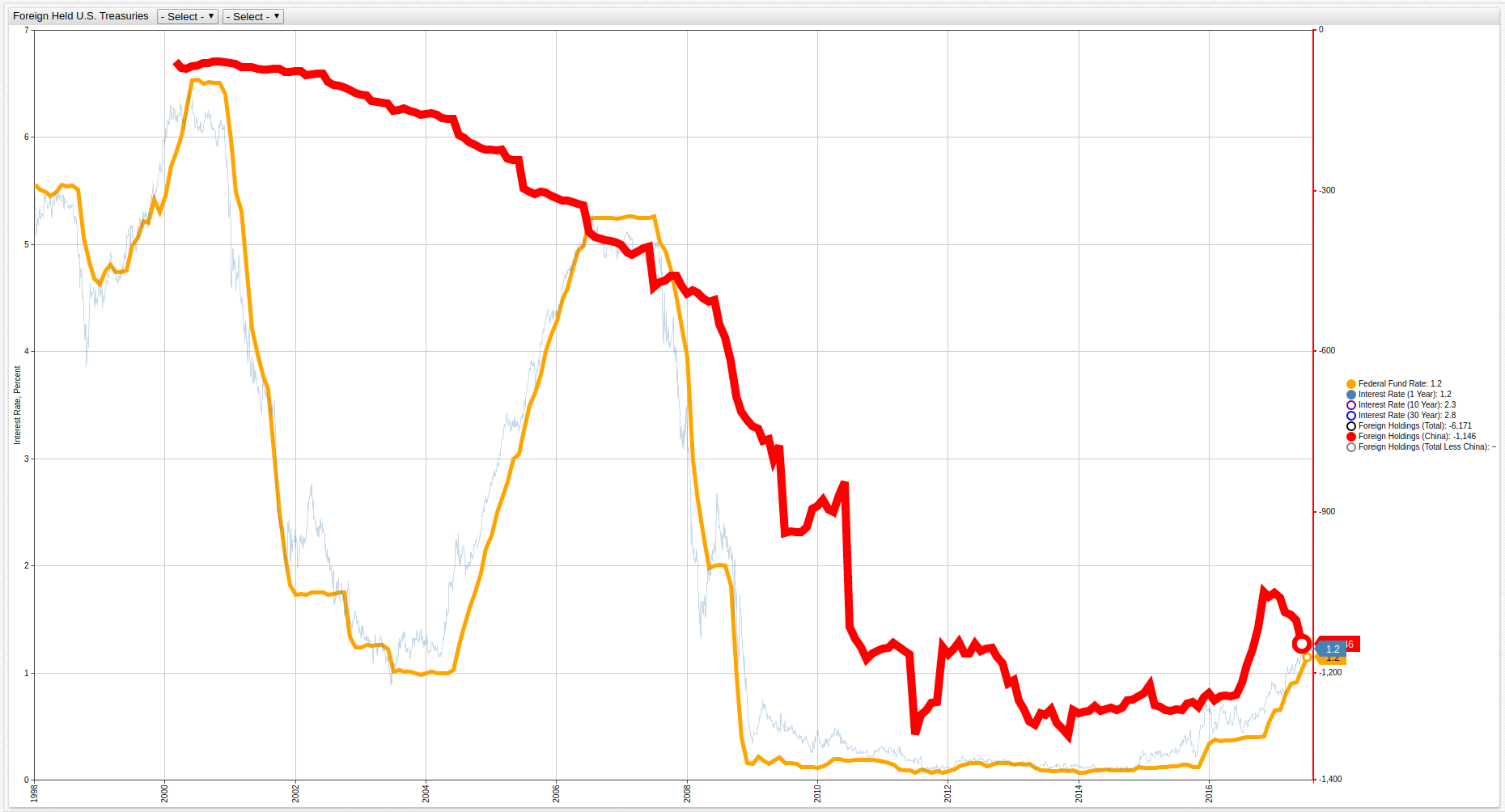 Although China possesses a significant position in American treasuries, the likelihood that the American economy is beholden to Chinese financial machinations is an oversimplification of an complex issue. Due to the global nature of the modern world, it is reasonable that a super-power such as the PRC would have some level of influence over American policymakers because of their invaluable position in the global supply chain, however the assertion that China is capable of completely devaluing U.S. treasuries is shown here to be false. Even upon large-scale sale, or no movement, the total number of U.S. treasury positions operates independently of Chinese treasury positions showing once again, the lack of significant influence that Chinese bankers are able to wield.

Worth noting is the custodial positions mentioned in Figures 8 and 9. Together they represent more than the Chinese position alone, and the bearers of those treasuries are unknown. It is possible that such positions could be held by Chinese agents or allies and their actions would be covertly dictated from Beijing. For example, when the scale of Cayman-held treasuries is adjusted to match Chinese levels, the leveling-off of Chinese movement is matched fairly well with a sudden increase in Cayman positions, shown below: 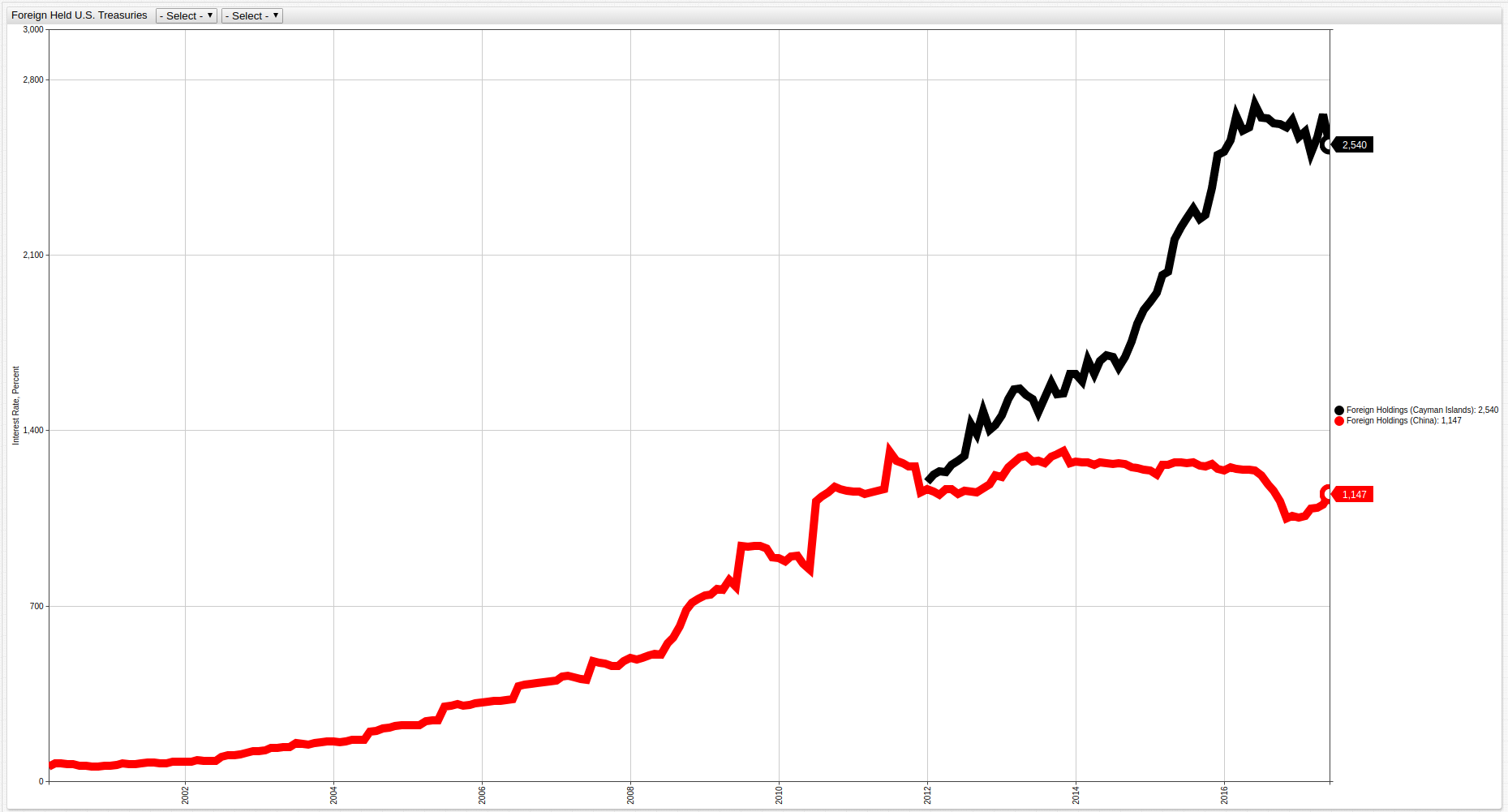 Despite such hypotheses, the nature of the global economy is such that most countries are inherently reliant on one another for import or export needs, financial support, or a number of other metrics. True financial downturn has long-reaching global effects, seen during the recent Great Recession where the sub-prime mortgage crisis, which began in America, ultimately resulted in a global contraction of gross domestic product (GDP).