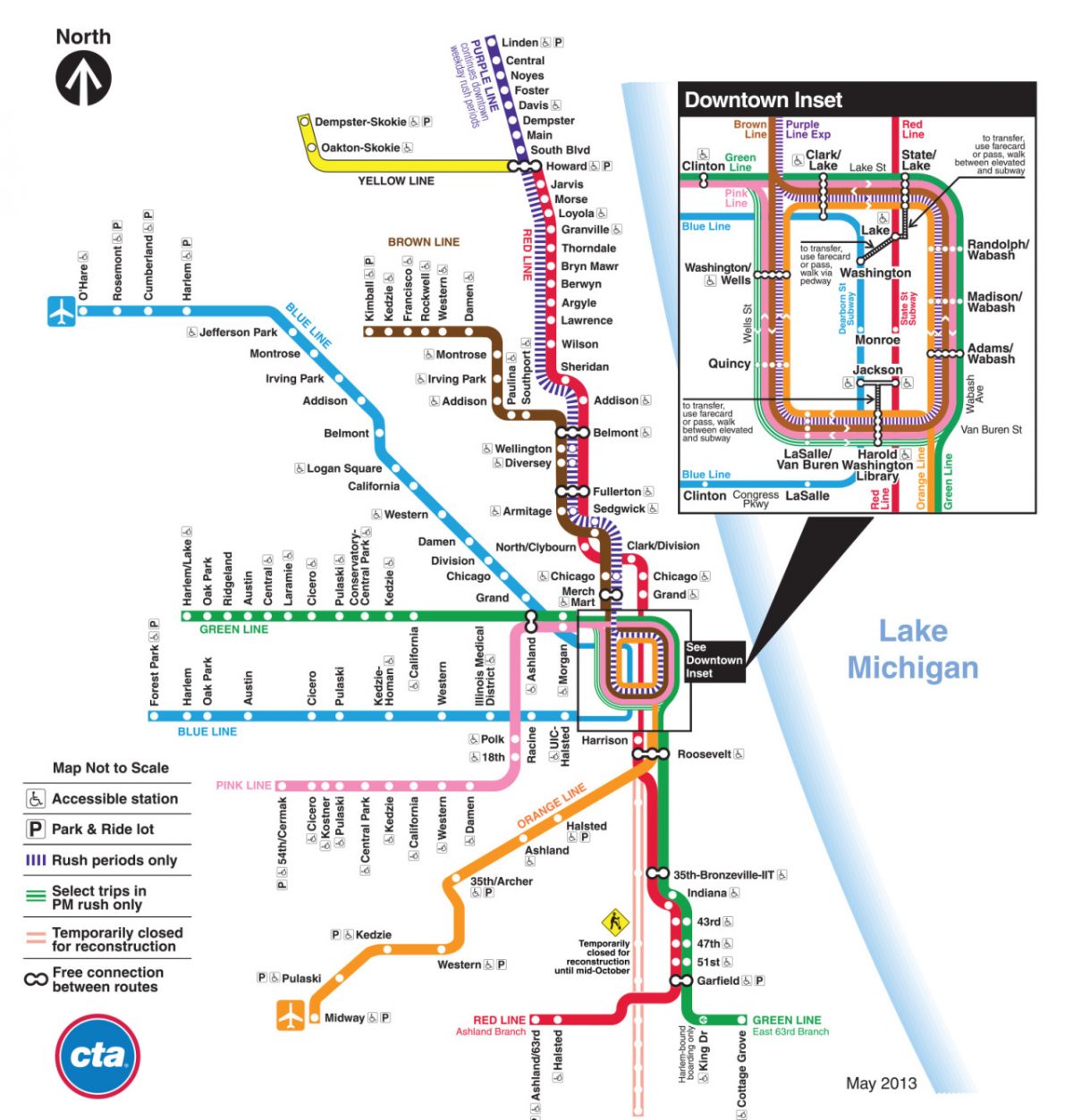 The Chicago Elevated or 'L' Train, is a fixture of the city, with portions of the second-busiest transit system in the United States operating since 1892. The L sees close to a million passengers every day spread across its 145 stations and more than 100 miles of tracks.

Using ridership data released by the City of Chicago rider estimates can be made for the future. Analytics tools in ATSD can model current ridership trends to highlight patterns in transit system usage and future value models can be used to estimate future rider totals. The population of Chicago is falling, and it is the only major United States metropolitan to experience such changes, but unfortunately, that is unlikely to mean an extra seat opening up on the commute home. Although currently in a period of growth stagnation, the City of Chicago has plans to fully update and re-brand the L to adapt it to the modern city landscape and help it to regain its relevance in the age of the mass car ownership.

Four instances in time are examined: 2001, 2006, 2011, and 2016, to establish standards of annual ridership. Month-to-month data is visualized to show usage trends throughout the year and finally, future ridership predictions are made for the years 2020 and 2025.

Open the visualization below in ChartLab to see the data in its entirety. Use the drop-down lists at the top to navigate through time, selecting the years to be observed. Use the third drop-down list to toggle between visualizations of the top or bottom fifteen stations, the top or bottom fifty stations, or select the wildcard (*) option to see all 145.

While it is certainly possible that L ridership has peaked and will begin to decline in the future, a total of three such periods of stagnation are observable throughout the observation period of 16 years leading to the conclusion that there are, and always have been, occasional decreases in annual ridership that are not necessarily indicative of true decline.

Similar increases and decreases in L ridership can be seen when the scale of the observation period is reduced to one year. Drag the window to the left or right to shows rider numbers of any given month in the legend at the top of the screen.

Because of the nature of L ridership, and the patterns observed in the visualizations above, using data from the previous year as a baseline for performance during the current year is reasonable. Ridership is increasing consistently when aggregating the data in 5-year interval periods. Despite this, there still exists occasional periods of stagnation to consider, which is why a second baseline must be established. Using an Average Value Baseline makes sense given the fluctuations in passenger totals because such a calculation would account for both positive and negative changes in ridership and combine them for calculation of future year averages.

Similar to the financial model for calculating the future value (FV) of an investment, the formula below is used to predict ridership on the L several years in to the future:

For the given dataset, the average value baseline to be used is 170.69 million riders.

These calculations are meant to show two possible methods of predicting future ridership aboard the Chicago L train. The typical data would be within 1.62% of previous year ridership, and each year would represent one step from the annual average. This means that between any two given years, the difference is roughly 1.49% multiplied by the number of years between them, and between any two given consecutive years, the ridership totals is within 1.62% of each other. As the numbers are close together, they can even be used in conjunction with one another, with the understanding that expected mean percentage error (MPE) is on the order of 0.13% multiplied by the difference in years, or when speaking of passengers, using the average amount for reference, two hundred thousand passengers times the difference in years. This error is not on an order higher that 10 x 10-1 for these purposes, and indicates the likelihood of the model to lose stability as it attempts to predict rider amounts further and further into the future without inputting new training data and pruning old information.

This model predicts the probable bounds of ridership aboard the Chicago L. As the amount of time between the training data and the prediction grows, the uncertainty of the model does as well, which is reflected by the growing difference between the bounds of probable ridership.

While probably too broad a model to be used for serious funds allocation or city planning, the applications of such a model are diverse; future growth estimates are excellent for determining target values of certain infrastructure and providing bounds for more specific calculations that can act as guidelines for the results. As time passes, the training data can be modified to provide more time-specific information. If L ridership has indeed peaked and the rate of its coming decline is to be calculated, early 2000s training data could be excluded and more recent data could be included to predict future, lower ridership levels using a new average value baseline, and updating the average percent change in the previous year baseline number.

The City of Chicago pays close attention to L ridership levels and publishes an annual report which details their own expectations for rider totals. For the reports available for 2017, the total number of riders has been lower than the targeted amount posted by the Chicago Transit Authority, shown in the following DOCUMENT-REMOVED-FROM-SOURCE, however, several station experienced significant growth in rider totals and the CTA has plans to open several new stations before the year 2020. With respect to the falling population in Chicago, and Illinois as a whole, several analysts have predicted that the population of the Second City will stabilize and even begin to grow again by 2020, which means that counting on the continued stagnation of transit riders in the city seems to be betting against the house.