# Visa Travel to America: Identifying Trends and Outliers with Charts, SQL and Redash

This article analyzes a dataset from travel.state.gov concerning non-immigrant visa figures from 1997 through 2015. Publicly available data collected by government organizations can be loaded into ATSD for interactive analysis. This article illustrates some of the capabilities of Redash, an open-source data visualization tool that is integrated with ATSD. Make SQL queries in ATSD and create visualizations in Redash. Install a local ATSD distance and import the data from this article to recreate any of the visualization or queries here.

This dataset contains yearly totals for non-immigrant visas issued from 1997 through 2015. Totals are collected for 84 different visa types. The complete list of all the visa types included in this dataset is available as a .txt document in the Resources directory. The U.S. Department of State website contains detailed description of each of the available visas.

Visa figures are collected for 200 countries, seven continents, and those of unknown national origin. The complete list of all tracked countries is available in .txt format in the Resources directory.

As opposed to analyzing the dataset in Excel, it is much more convenient to interact with the data once it is loaded into a database. Load the dataset into a local ATSD instance by following the steps provided in Action Items.

The portal below sorts by country and visa type. Navigate between different countries with the first drop-down list and by visa type with the second. The visualization shows H-1B visas, which are temporary work visas for workers in specialty occupations, issued to Indian nationals from 1997 to 2015, which increased from 31,684 in 1997 to 119,952 in 2015. The number of visas issued to mainland China grew from 3,206 in 1997 to 18,306 in 2015.

The two ChartLab portals above foster a general understanding of the situation of non-immigrant travel to the United States. Broaden your understanding by examining more specialized visas, such as the O-1 visa.

The visualization below shows countries with the greatest number of O-1 visa, which is a work visa for individuals with exceptional abilities. The brain drain from other countries has steadily grown over the years, especially from the U.K., which in 2015 had 2,630 O-1 visas issued. In comparison, China only had 515 O-1 visas issued in 2015. Going back to the first ChartLab portal, the total number of visas for the U.K. fell by 61% form 1997 to 2015.

The visualization below tracks the total visas issued for the countries included in the revised travel ban of the current administration. The countries affected are Iran, Libya, Somalia, Sudan, Syria, and Yemen. After September 11th, the number of visas issued to these countries dropped to only 16,076 in 2003 but climbed back up to 62,464 in 2015. Visas to the United States are generally priced at $160, which amounted to $10 million in revenue in 2015. 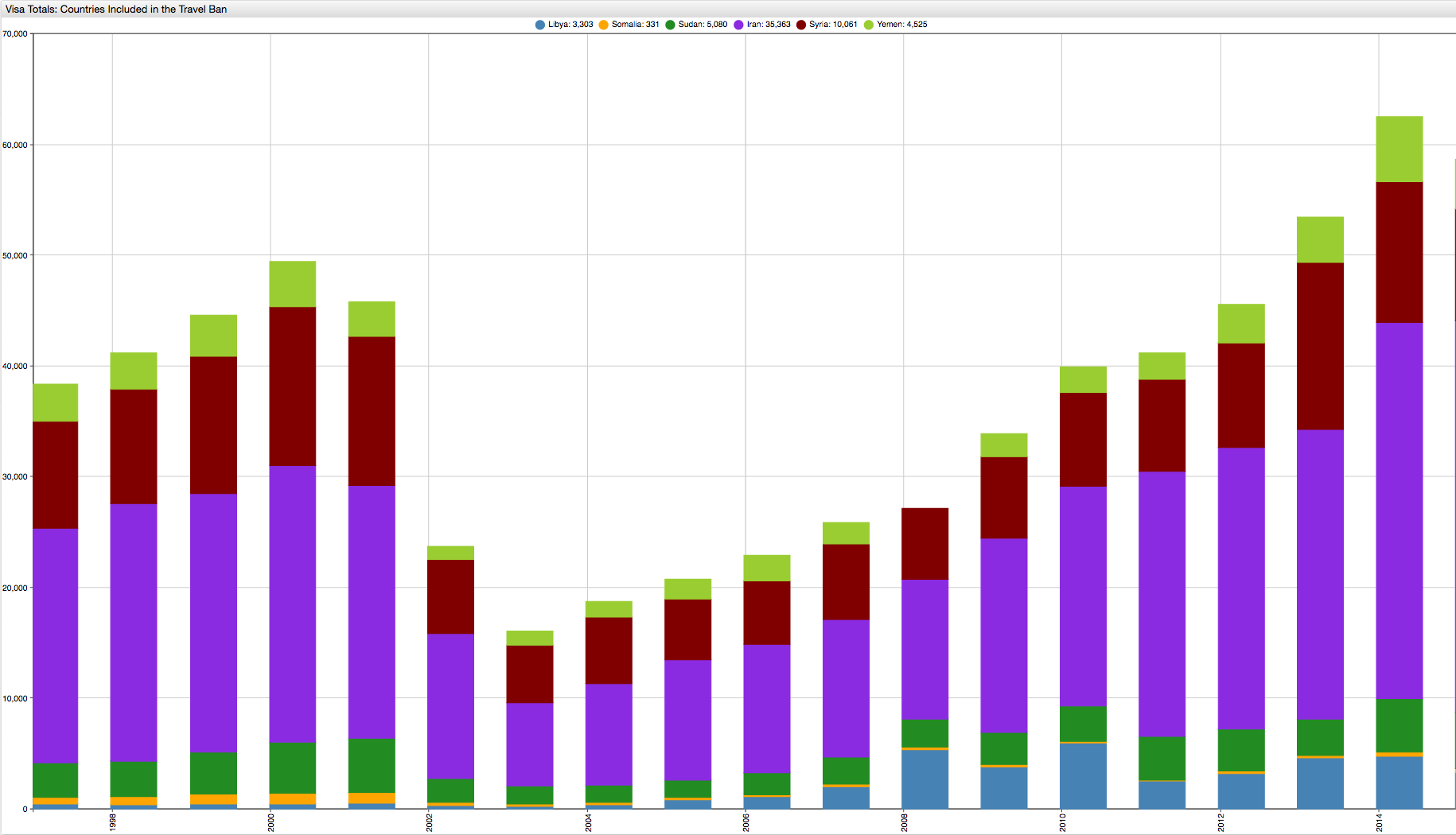 According to a recent article published by Reuters, the European Union (EU) is becoming increasingly insistent on requiring American citizens to obtain travel visas to visit Europe. This is in response to Washington refusing to grant visa-free access to five EU countries: Poland, Croatia, Bulgaria, Romania, and Cyprus. All EU countries except for these five can travel to the United States without a travel visa. The following visualization shows the number of B-1 and B-2 visas from these countries between 1997 and 2015. The start of the new millennium saw the peak number of B-1 and B-2 visas issued to these countries, but in recent years these numbers have decreased dramatically, falling to 9,977 in 2015 ($1,596,320 in revenue at $160 per visa). 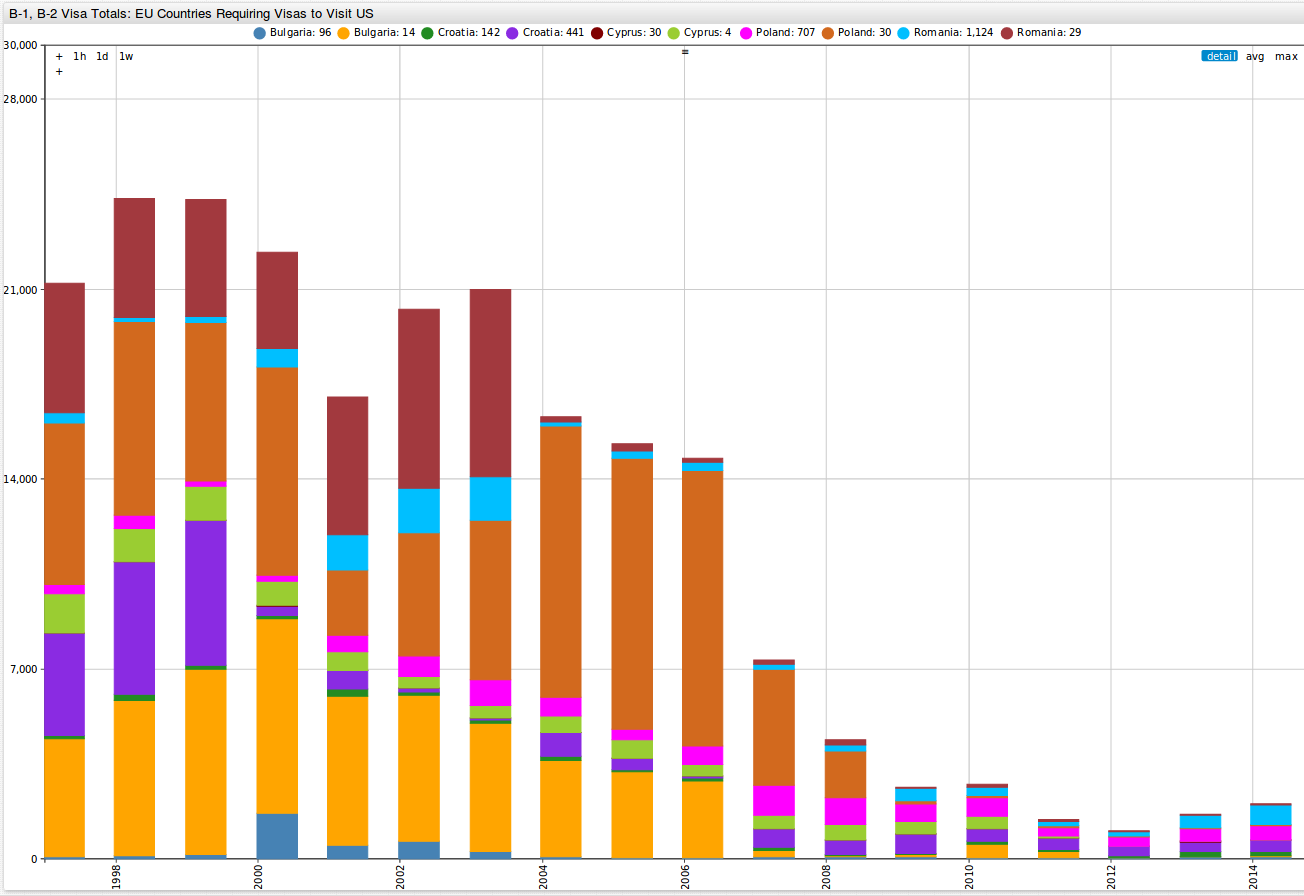 If the EU required U.S. citizens to obtain travel visas, Washington would likely reciprocate the demand and require the currently visa-exempt countries of the EU to obtain visas to visit the country. The total number of European travelers to the U.S. utilizing the visa waiver program is 14,043,823 and 13,997,570 in 2014 and 2015, respectively. At $160 per visa, this amounts to roughly $2.24 and $2.239 billion, respectively. 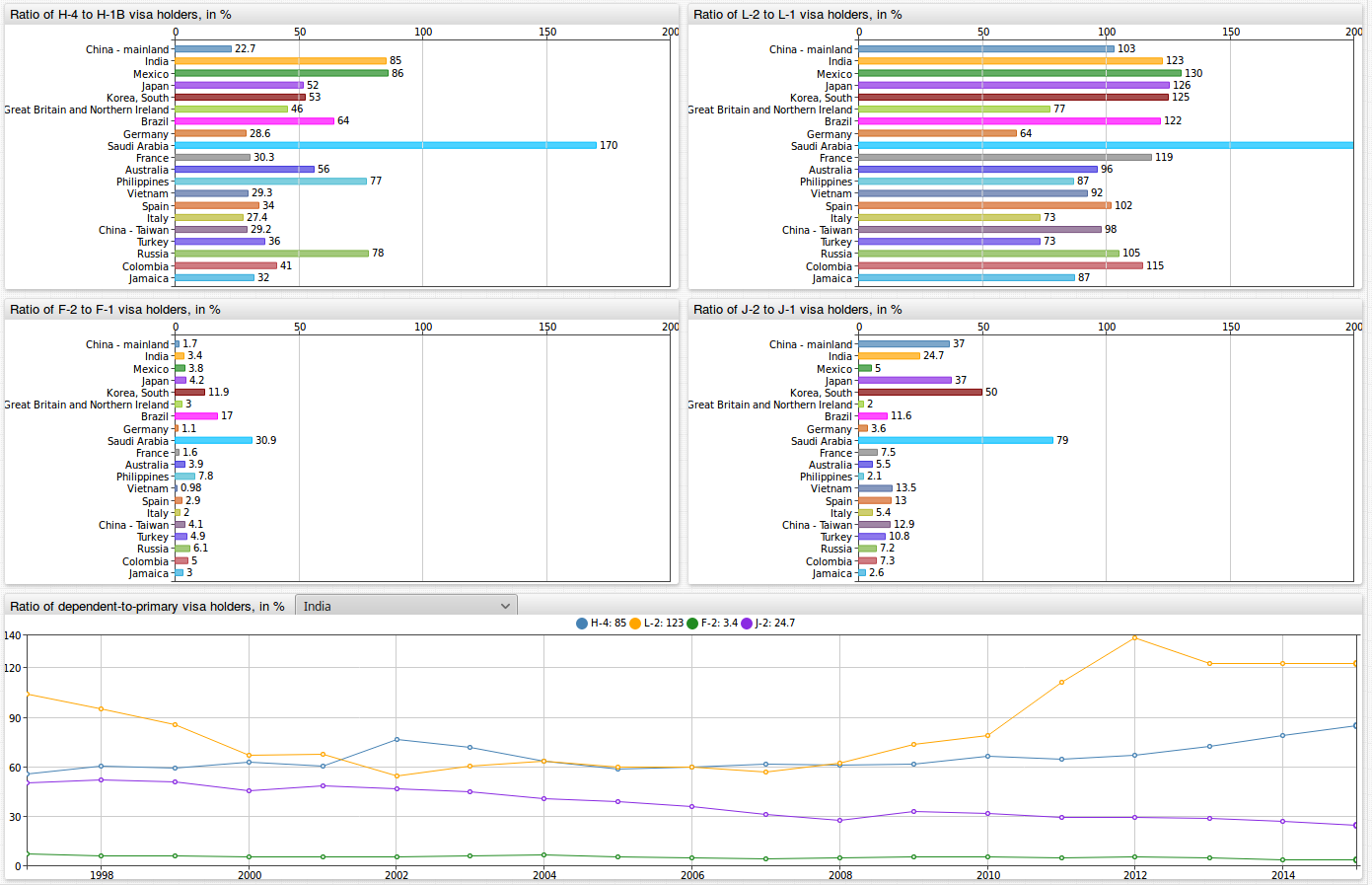 In addition to outputs from ChartLab, ATSD also supports SQL queries from the web-based SQL Console.

This query shows the number of the most popular visas issued worldwide, except for B (travel), C (transit), G (government), and A (diplomatic). By far the greatest number of visas issued in 2015 is the F-1 student visa, of which 644,233 were issued.

This query shows the top 15 largest countries by non-immigrant visas in 2015, for all visa types except B (travel), C (transit), G (government), and A (diplomatic).

SQL queries are a great tool for searching for and displaying specific information from a dataset in tabular format. One of the biggest drawbacks of SQL is the lack of visualization. Axibase partners with Redash, an open-source data visualization tool. Insert your query results into Redash and create visualizations using SQL result set data. To start, integrate Redash and ATSD. Setup takes about 10 minutes.

Mouse over any column to show data for a particular visa type in 2015. Click Save to save the configuration and come back to it anytime. Click Publish to make configuration available to other users with the appropriate log in credentials.

What may have been missing in the tabular SQL query result set is the fact that the number of visas issued to Vietnamese citizens remained relatively small but the compound annual growth rate in this 10-years period is 30.2%, less than only Brazil with 35.6%.

Install a local ATSD instance and recreate any of the queries of visualizations from this article: