# The Port of Los Angeles: Sustainable Progress for the Future of the City 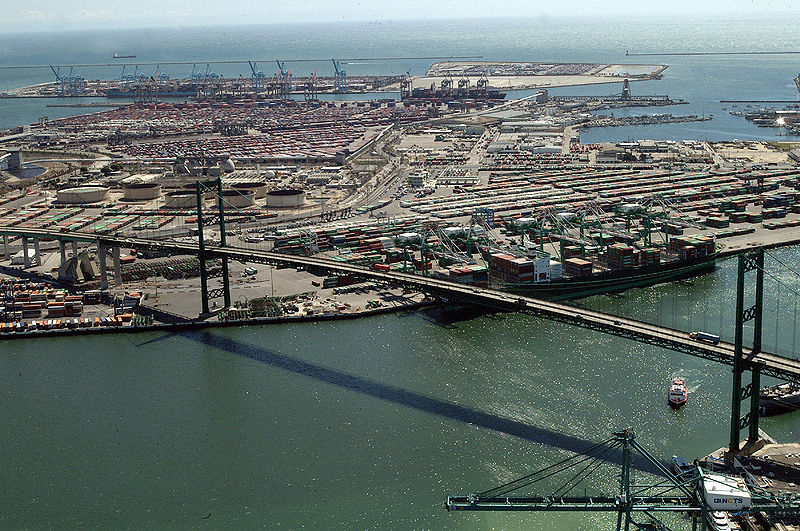 The Port of Los Angeles, also known as America's Port, occupies 7,500 acres of land and water in southern Los Angeles. Directly across the Vincent Thomas Bridge from San Pedro, the home of the port, in Long Beach is the entirely separate Port of Long Beach.

The Port of Los Angeles handles over $1.2 billion of unique cargo every day from its 23 cargo terminals, 270 deep water berths, 77 container cranes, and 113 miles of on-port railways. The Port employees half a million Southern California residents, and has 2.8 million employees worldwide. When ranked by cargo value, America's Port holds the top spot in the United States with a value that continues to grow each year. By volume, the port is ranked 16th in the world (or 9th if combined with the nearby Long Beach Port), and has recently had its main navigational channel deepened to 53 feet to accommodate the newest line of super-sized international freighters, yet to debut in American port waters.

Amid the development, the Port has managed to prioritize green initiatives to lower its internal greenhouse gas emissions and meet city, county, state, and federally mandated goals for cutting the amount of harmful combustion by-products expelled into the already polluted Los Angeles air.

The City of Los Angeles has released annually-aggregated total emission data from a 2005 to 2012 study to document its progress with respect to reducing greenhouse gas emissions. Pollution is something taken seriously in Los Angeles due to the magnitude of the problem, and the Port even allows individuals to track live information about local air quality from their on-site air quality testing center.

The pollutants recorded by the port are shown below:

All values are recorded as tons per year (TPY)

These three forms of greenhouse gas emissions contribute to a number of negative outcomes associated with big industry. Diesel fuel is the primary industrial fuel source the world over but despite this, the port manages to power the majority of its on-shore technology with California-generated electricity from the Water and Power Department. Various compounds formed by oxygen and nitrogen, specifically nitrogen dioxide, are the result of high-temperature combustion and form the tell-tale brown haze known as smog that suffocates polluted city skylines across the globe and contributes to acid rain when mixed with the sulfurous gases produced by coal and petroleum usage. Sulfur oxides, while sometimes naturally occurring, are more commonly negatively associated with industry processes and the formation of dangerously acidic rain, which can harm plants and animals alike and even damage buildings.

The annual average value of each of the observed metrics is shown above. The annual average can be helpful when looking at overall emission totals because it establishes perspective for the following visualizations. Additionally, it shows relative change amongst different metrics, for example when comparing DPM change to NOx change, what amounts to a huge seven year reduction of Diesel Particulate Matter relatively, is more than doubly achieved in NOx emission reduction for 2006-2007.

The numbers associated with the Time Chart above are shown below:

This dataset is queried using SQL Console in ATSD.

To give these numbers perspective, when the study began in 2005, the Port of Los Angeles is responsible for 10% of all diesel particulate matter in the Los Angeles Basin: an area composed of part or all of the counties of Los Angeles, San Bernadino, Riverside, and Orange. When the study concluded just seven years later that number had dropped to 4%. That six percent reduction of greenhouse gas emission in seven years (0.85%/year) is on par with the overall reduction in the State of California during a twelve-year study (0.50%/year) conducted across several states, with New York seeing numbers as high as 30% during the same observed period (2.5%/year).

Using the previous year as a baseline, the percent change for each year is shown below:

The SQL returns this result set:

In 2005, the Port represented only 5% of Los Angeles Basin area nitrogen emissions, but by 2012 that already low number had fallen even further to only 3%. What is interesting to note with the NOx metric, as shown above in the visualization above and below, NOx production by the port paradoxically represents the overwhelming majority of raw emission numbers from the port but only a fractional amount of the overall emission rate in the Los Angeles Basin, giving perspective on the sheer magnitude of the problem of NOx emission in the Los Angeles area. NOx compounds are a contributor to both smog and acid rain and primarily form during imperfect high-temperature combustion processes such as those that occur under the hood of consumer automobiles.

The numerical values associated with the above visualization are shown below:

Sulfur Oxide is produced naturally by volcanoes but the majority of its harmful production comes from burning fossil fuels in industrial processes. The Port of Los Angeles has cut its own portion of such production by 20% in 7 years, down from 25% of the Los Angeles Basin total in 2005 to just 6% in 2012.

The Port of Los Angeles reduced all measured metrics by a significant amount over the observed period. The histogram below details those changes, showing the frequency of various percentile changes.

The above chart details the frequency and severity of the Port of Los Angeles' efforts to reduce various observed pollution metrics. The large central red bar shows that the majority of the reduction for diesel particulate matter is consistent throughout the observed period, but much more varied for NOx pollution. Interestingly, this wider range resulted in substantially better reduction results, detailed in the legend at the top of the screen.

Open the diagram in ChartLab and use the drop-down list at the top of the screen to see the changing total values of each metric relative to one another throughout the entire observed period.

Based on the above diagram, the relative levels of each measured pollutant are shown alongside one another. Throughout the observation period, NOx pollution is emitted significantly more than the other two metrics combined. Nitrogen oxides most heavily contribute to the reddish-brown smog layer that hangs over Los Angeles and other polluted metropolitan areas.

The visualization above shows the combined total tons per year emitted by the Port of Los Angeles, further classified by type of pollution within each column. 2012 emission levels are about one third of what they were in 2005, demonstrating an earnest commitment to reducing harmful greenhouse gas production.

Starting in 2006, the Port of Los Angeles has pursued effective and aggressive means to reduce the production of the most harmful greenhouse gases and by objective standards they have succeeded. In fact, the according to the results of the 2012 Inventory of Air Emissions, the Port has outperformed the ambitious goals it set for itself almost half a decade ago. As the world pushes further ahead in the quest to reduce the human impact on the planet, organizations like the Port of Los Angeles show that making ardent strides forward is possible for industries of any type, location, and size.