# The Slow Death of the American Automobile Industry

Open the ChartLab visualization above and use the drop-down lists to navigate through time.

One of the first industries pioneered and perfected in America is the personal automobile. The roots of industry date back to the turn of the nineteenth century, when the first internal combustion engine was invented and patented in France. The first production automobile debuted less than a century later in Germany under the auspices of automobile engineer Karl Benz, whose company still produces cars under the Mercedes-Benz mark. However it is Henry Ford's Model T, which debuted in 1908, that changed the course of the personal automobile forever.

The Model T revolutionized the automobile industry for a number of reasons. The introduction of assembly line production dramatically reduced manufacturing costs which in turn lowered the price of the car on the sales floor and made it affordable to the burgeoning American middle class. In modern times however, corporate mishandling of the legacy of Mr. Ford ultimately reached a low point in 2008 during the Great Recession, when the United States Government offered the "Big Three," that is Ford, Chrysler, and General Motors, a bankruptcy-avoidance bailout to the tune of close to $80 billion, of which, more than $9 billion eventually became considered a loss.

Economists and the American public generally view the bailout in a reluctantly positive light, after all the auto industry employees more than 4 million Americans and has made models like Mustang, Corvette, and Viper household names the world over, but it seems that even despite administration attempts to revive the dilapidated industry, foreign imports are slowly but surely pushing American producers out of their own market. 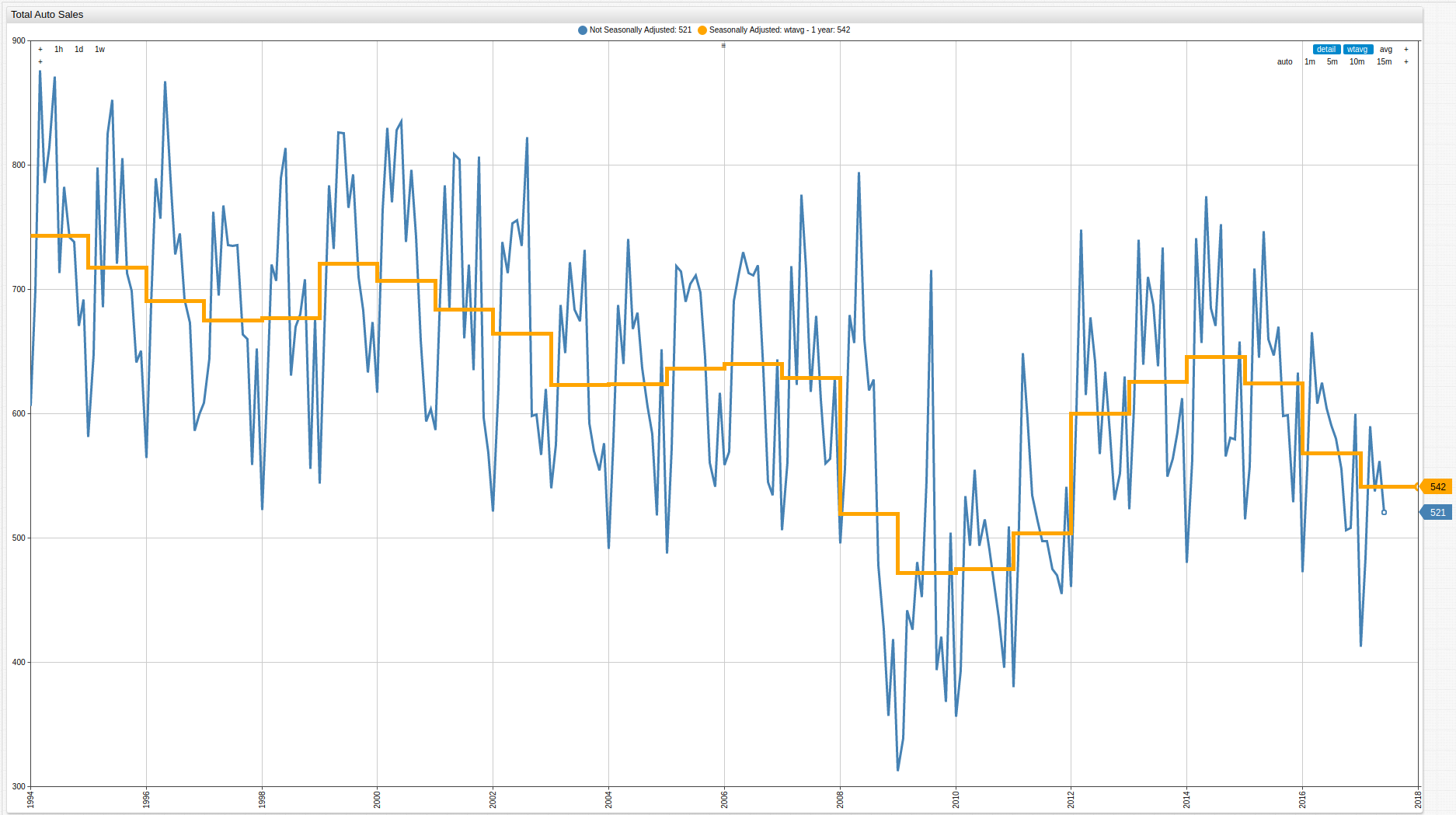 Using the moving average function to seasonally-adjust the underlying data more elegantly captures the trend of declining automobile sales. The above mentioned production downturn of the late 2000's is clearly visible alongside the recent trend indicating less and less cars being sold. 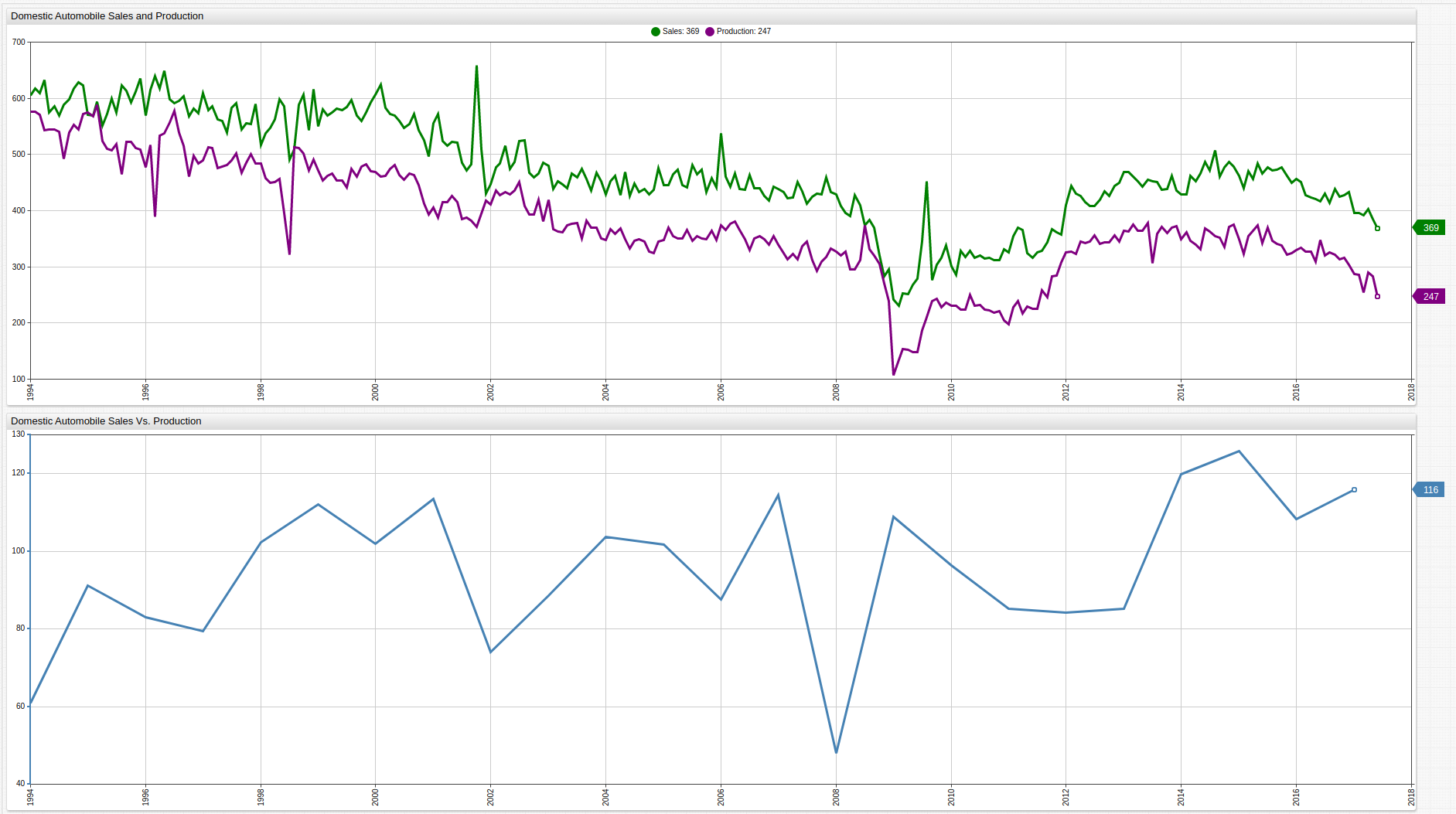 The second part of the above visualization tracks the difference in domestic automobile production and sales which remained within a range of roughly 100,000 units and is derived from the underlying data using an ad-hoc calculation in the ChartLab interface. This value has been averaged over each observed year, and is an excellent metric to gauge trends in production output. Because sales are likely a much larger factor in deciding production, then production is a factor in predicting sales, this line shows that declining sales are being met with declining production. But more than that, production is declining more quickly than sales, indicating an overall contraction in the entire market and a lack of confidence in the likelihood of its eventual recovery. 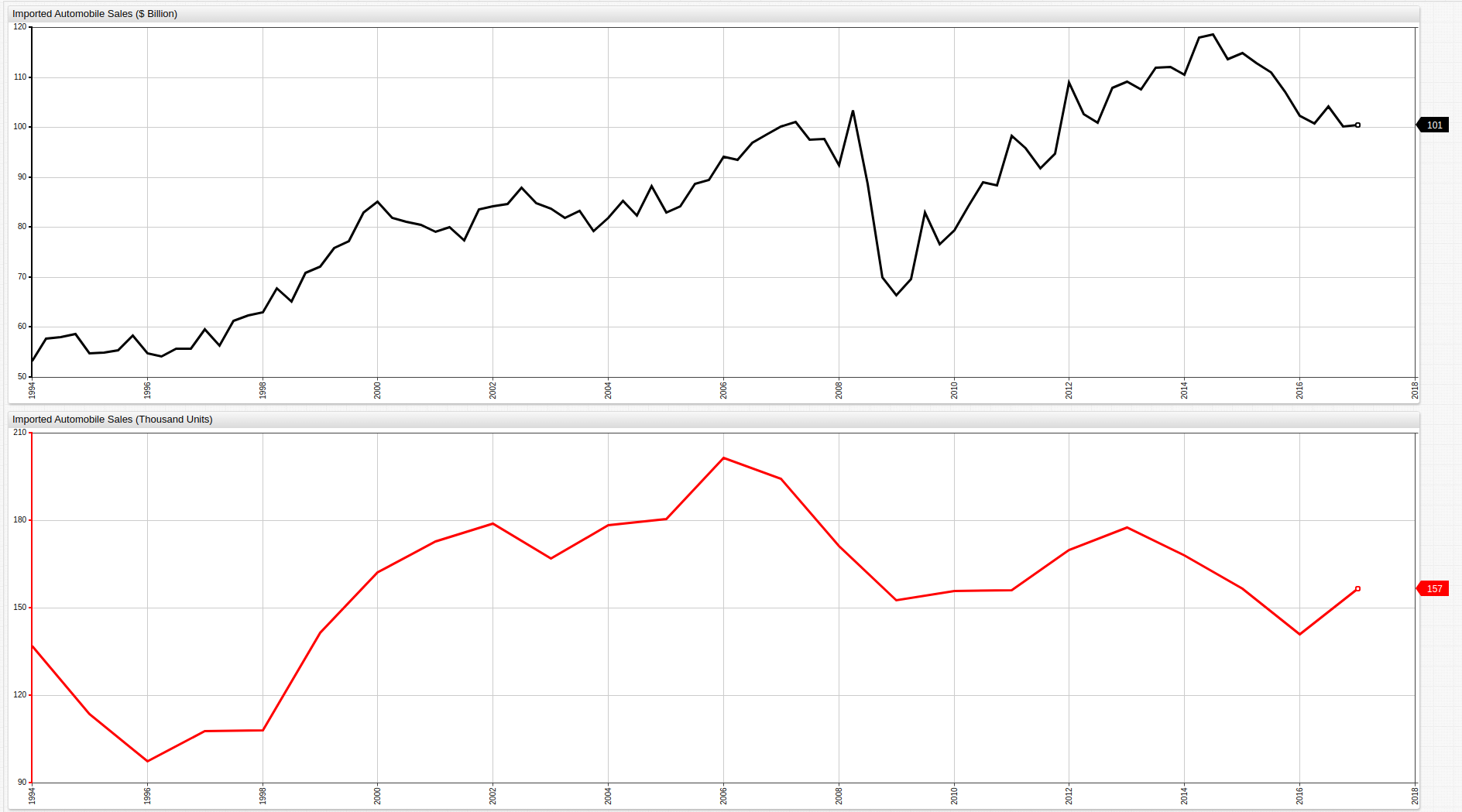 In stark contrast to falling domestic sales figures, imported motor vehicle sales have shown both a quicker post-recession recovery and more promising long-term potential. Only five of the top twenty best-selling cars in America for May 2017 came from American producers. 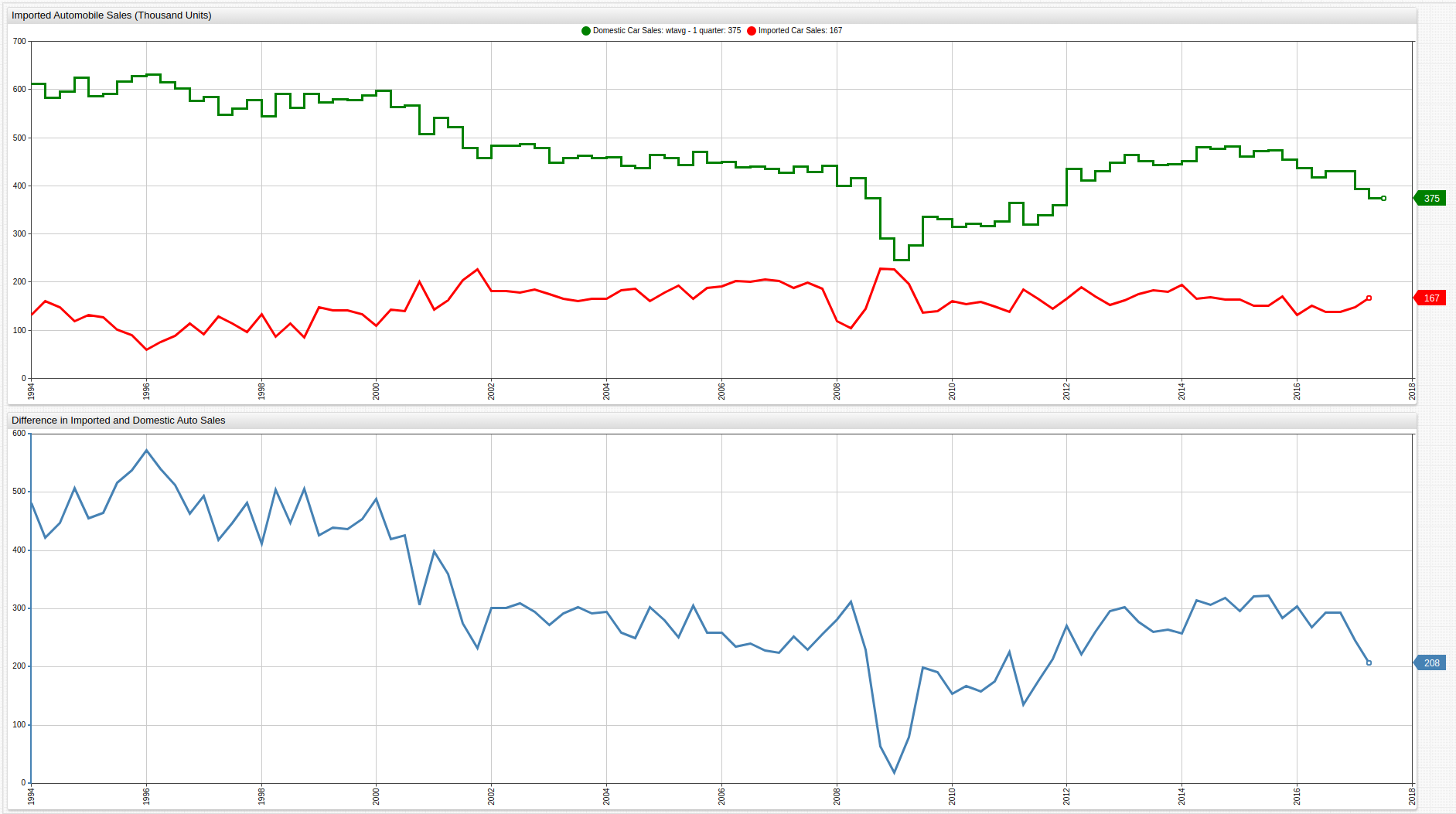 Source: See Figures 2 and 3 above.

The shrinking gap between domestic and imported automobile sales is shown above, with the lower portion of the visualization showing a derived series obtained by subtracting the number of imported vehicles sold from the number of domestically-made vehicles sold. Over the observed fifteen year period, the difference in sales has been reduced by more than half, which is no small feat considering the American automobile sector is one of the the most important in the country. 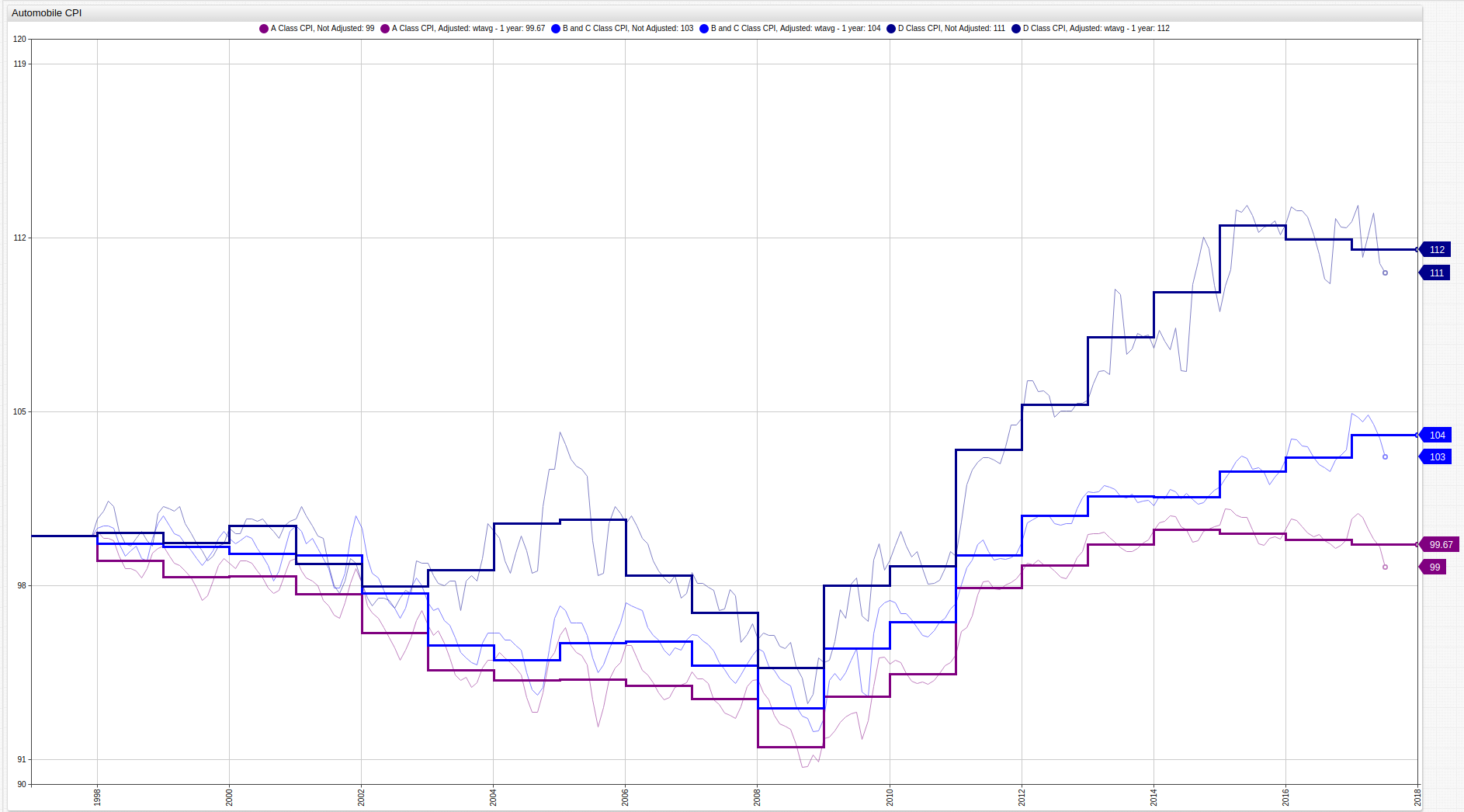 Further, the above chart details the Consumer Price Index (CPI) for four types of common consumer vehicles. The categorization system ranks vehicles by size and load. The only class of vehicle which showed a significant increase in overall cost during the observed period is the D Class, mostly populated by sport utility type vehicles.

Overall automobile sales are growing smaller and smaller in the United States and amid that reduction, the market is being further and further dominated by import manufacturers. Certainly, some of these manufacturers maintain local plants in the United States, but their headquarters are located abroad and the majority of their profits end up there as well. As the second largest automotive market in the world and originator of the industry, the United States should be able to leverage its home field advantage and massive consumer base into the kind of success that made the industry what it is today, or more accurately, what it was twenty years ago.

Instead, despite the massively expensive bailout less than ten years ago, American automobile manufacturers are struggling to stay relevant when faced with competition from Asian and European automakers like Honda, Toyota, and Volkswagen.

If auto-makers in America are interested in keeping their hegemonic position at home, and indeed, their jobs in the future, a serious re-structuring of the way the industry does business needs to happen and it needs to happen now. Production costs are not to blame, there are a number of international trade partnerships like NAFTA that allow producers to makes cars in countries with lower wages like Mexico and bring them into the United States tariff-free. Lack of consumer demand is not to blame, despite decreasing sales numbers overall, what is left of the market is being gobbled up by foreign producers. Inflation is not to blame, the CPI values for automobiles of every size have been more stable than almost any other industry in the country. The blame lays squarely at the feet of the executive teams who have failed to create a product of value and are soon going to once again feel the cold sting of the free market if they cannot address the current inadequacies of the industry.