Time series databases are designed to collect massive volumes of data at high frequency. With ingestion speeds reported at 100K to 1M inserts per second, TSDBs are substantially faster than relational databases and messaging middleware such as WebSphere MQ configured in message persistence mode.

The typical reasons for data storms include:

Reasons for reduced storage throughput may include:

When the database is overflown with data and once local memory and file buffer limits are reached, there are two options to bring ingestion and storage rates in sync: slow down collectors or drop incoming data. There is also an option of running out of resources and terminating the database but lets not consider it as a viable alternative. We want the database to be continuously available, irrespective of the workloads.

The setting that controls the choice between slowing down producers and discarding data in the Axibase Time Series Database is called series.queue.rejection.policy and it accepts two options: BLOCK and DISCARD, with BLOCK being the default.

The BLOCK policy means that once a series queue reaches the limit specified with the series.queue.capacity setting, the database will stop receiving data from network commands, Data API insert requests, and file uploads. The database will not terminate connections – it will instead suspend reading data from sockets in blocking mode which will cause collectors to block as well. Each ingestion thread that is not able to add series to the persistence queue, which is full, will be blocked until there is space in the queue. This insures that no data is being lost while the database copes with a temporary imbalance.

The DISCARD policy means that once the queue limit is reached, newly received data will be dropped by the database to protect itself from memory or disk shortage. Ingestion threads will return instantly and the producers will not be subject to any blocking.

The differences between the two policies can be illustrated with metrics collected by ATSD:

Once the queue limit of 10 batches is reached, the database slows down producers and the received rate is bound by the write rate. Each batch is set to 2048 commands by default, setting the limit to a maximum of 20480 commands in memory. The queue size oscillates at or slightly below the limit while the producers are writing in blocking mode. 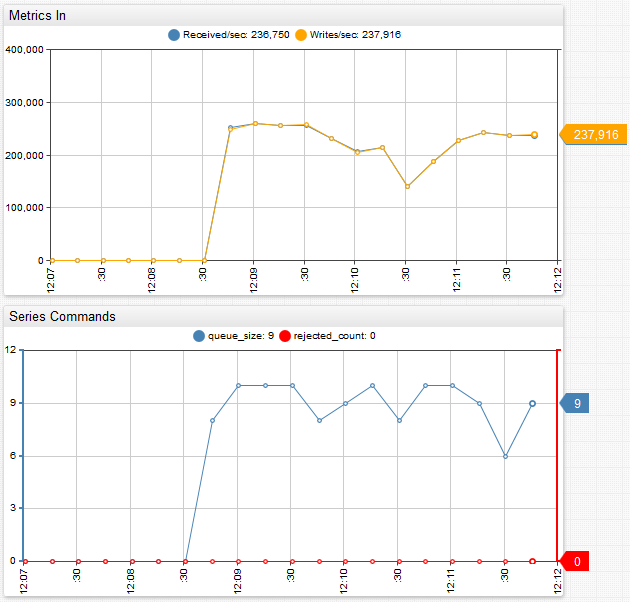 The delta between received and written commands is large enough to quickly fill the queue up to its limit of 10 batches. Once the queue is full, the database starts dropping incremental commands and series rejected count shows an average of 800 batches dropped per 15 second interval. 800×2048/15 = 109000 commands dropped per second, which is approximately the difference between received and writes per second. 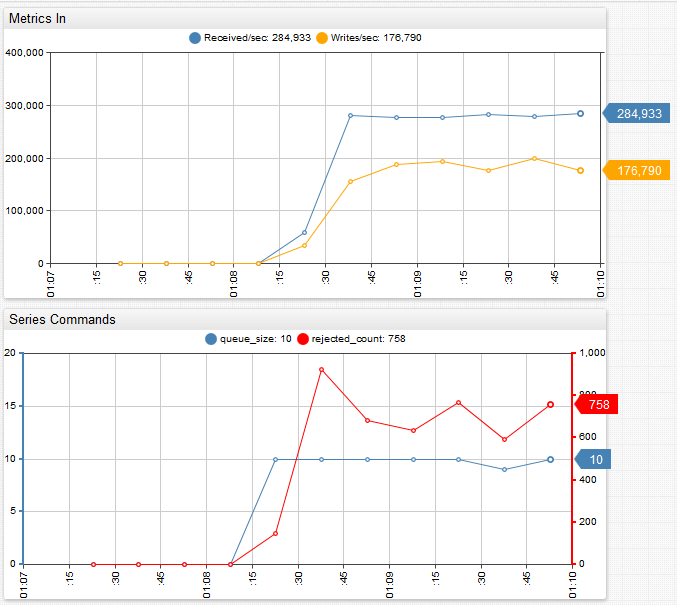 The trade-off between these policies is clear – what is good for producers is bad for data integrity. Should the BLOCK policy therefore be used everywhere? Not necessarily. There are situations where DISCARD makes for a reasonable design decision, including:

To derive an optimal series queue size, first consider how much memory is available on the server and how much of it is allocated to ATSD java process (Xmx). Review the received rate as displayed on the ATSD default portal and run HBase Auto Tests to determine recommended thread pool and batch sizes.

If Xmx exceeds 4GB, we recommend a queue limit of 256 and higher.

The database exposes the following metrics that can be tracked to ensure data integrity:

The metrics above can be used to create automated alerts. For example, the following rule sends an email alert if any series commands are rejected: 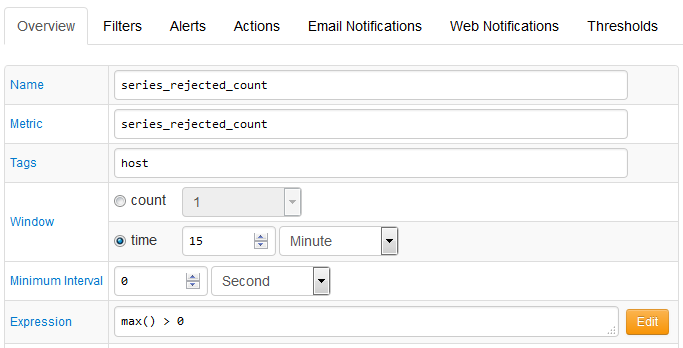 Reviewing the default ATSD portal to identify any occurrences of series rejections are equally important when determining optimal queue size.