Use the Trends Reference page to search for additional data and create a custom misery index for countries not included here. 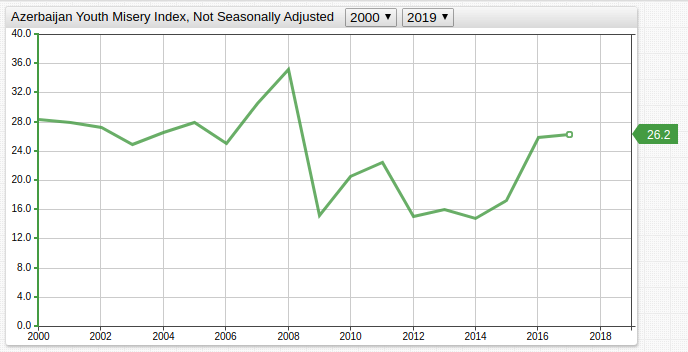 Because only youth unemployment is tracked in FRED, the Federal Reserve database from which data is sourced, a so-called youth misery index is shown above.

Azerbaijan has among the lowest youth unemployment rates in the Commonwealth of Independent States (CIS), a confederation of Eurasian former-Soviet states.2

Per FRED:
"Youth unemployment refers to the share of the labor force ages 15-24 without work but available for and seeking employment (modeled ILO estimate)."

Canadian newspaper The Globe and Mail predicted a low score for the Misery Index north of the Frontière Internationale in 2015, attributing some of the success to low energy prices curbing inflation.3 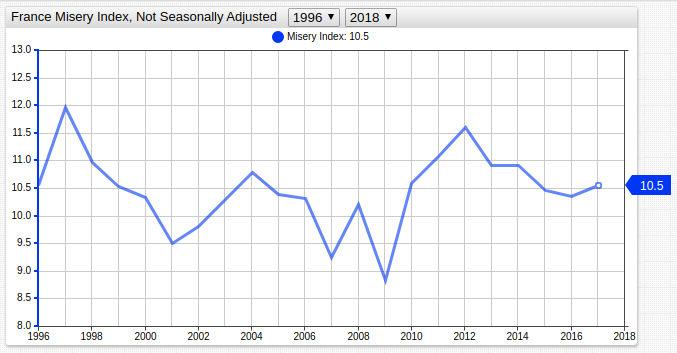 French data is only stored for the period 1996-2018. Using SQL Console to query the data shows a significant gap in the value of unemployment and inflation.

To view this discrepancy in the original visualization, hide the display settings for series unemp and inf. 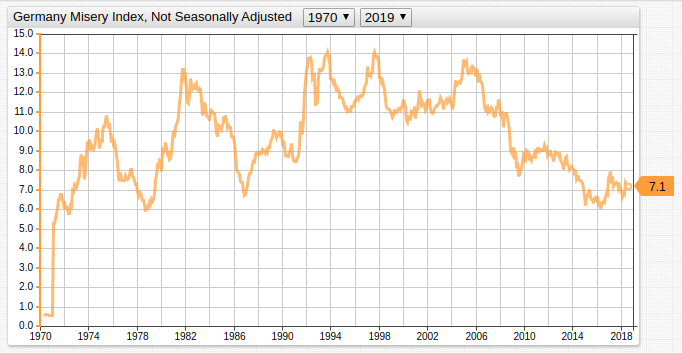 Before 3 October 1990, Germany was partitioned into two independent countries: the German Democratic Republic and the German Federal Republic.

As the Cold War came to a close and Germany reunified, disparate capitalist and Communist economies became one with some friction.4 The pre-unification misery index value of 9.0 would not be seen again until 2008. 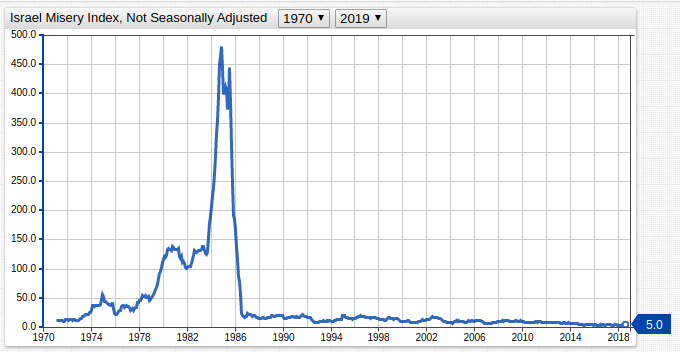 The effects of both currency overhauls, and their effects relative to one another are visible in the Israel Misery Index chart. 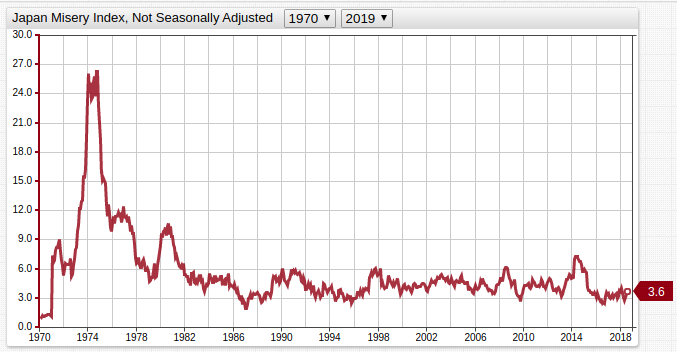 As mentioned above, the misery index was created during the Energy Crisis of 1973. At the time Japan had the world's third largest economy and consumed the second most oil, as such the country was severely impacted by the OPEC oil embargo.6

Reduce the high cardinality of the set with aggregator functions. 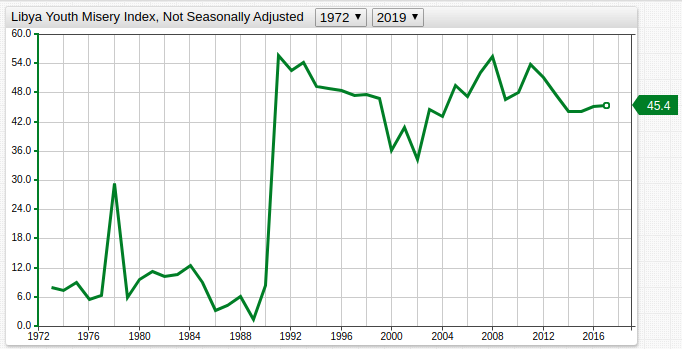 Note that only Libyan youth unemployment is tracked in FRED.

The foundation of the Libyan Arab Republic via military coup under Muammar Gaddafi in 1969 was a revolution with international implications. Colonel Gaddafi was implicated in secretly supporting the IRA, accused of orchestrating the Lockerbie plane bombing, and guilty of ordering an attack on the West German nightclub La Belle during the eighties.7 Western leaders, led by Ronald Reagan, responded harshly and ordered multiple bombing attacks on the country in retaliation.

During the early 2000s, UN sanctions were lifted from Libya in response to state admission of guilt in the Lockerbie case, and a promise to pay $2.7 billion in reparations. 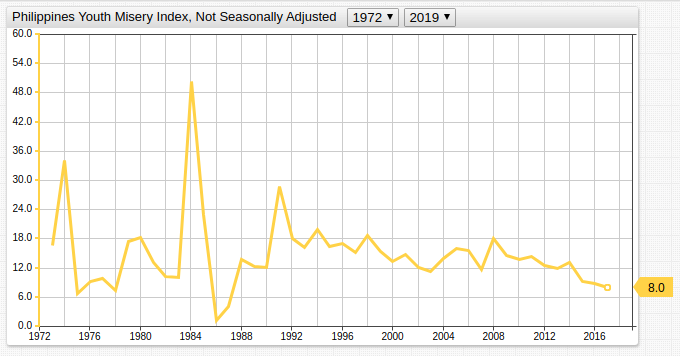 Since the spike in the youth misery index in 1986 correlating to the foundation of the Fifth Philippines Republic, the value has declined significantly. 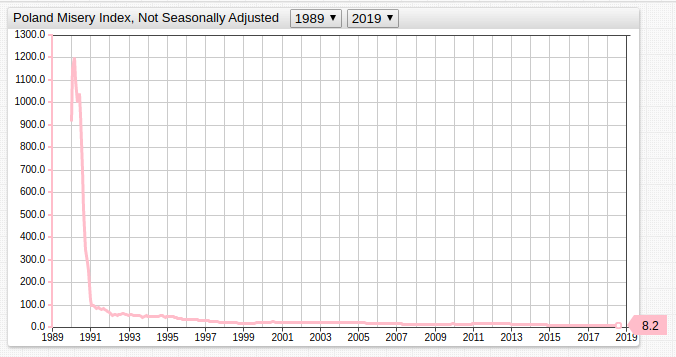 Control the maximum and minimum boundaries for data with high variance using the max-range-force or min-range-force settings. 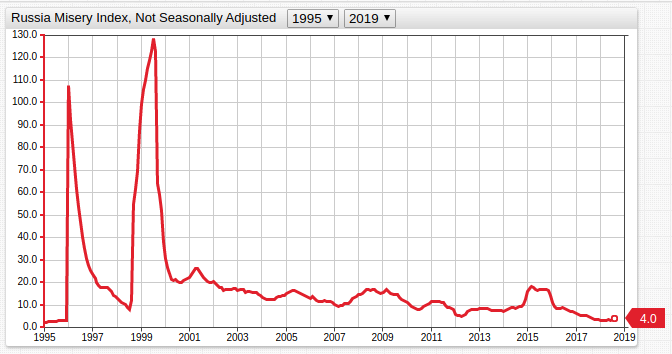 The effects of the 1998 Russian financial crisis are visible; the currency was greatly devalued resulting in soaring inflation and the government issued a moratorium on foreign debt obligation repayments on 17 August 1998.9

The color setting accepts web color names or hex codes; use exact colors when needed, such as the official colors of the Russian flag. Because one of the colors is white (#FFFFFF), use portal themes to ensure it is visible. 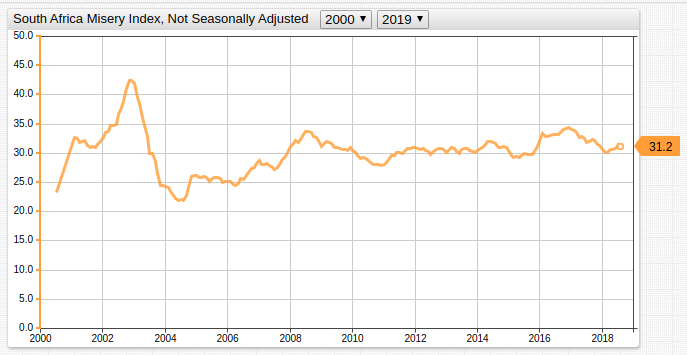 South Africa is plagued with high unemployment in general, and specifically among youth.10 Both general and youth unemployment are tracked in FRED and stored in ATSD. Each unemployment series is assigned a unique alias setting. 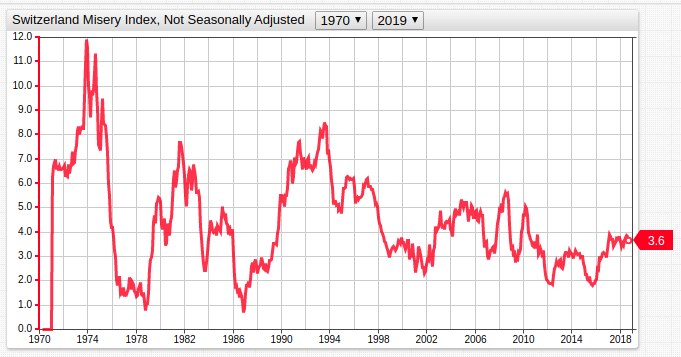 Tied with Japan for lowest misery index value at present, Switzerland has the second highest per capita GDP in the world. Roughly 74% of the Swiss economy is tied to the service sector, with European Union nations being the country's primary trading partners.11 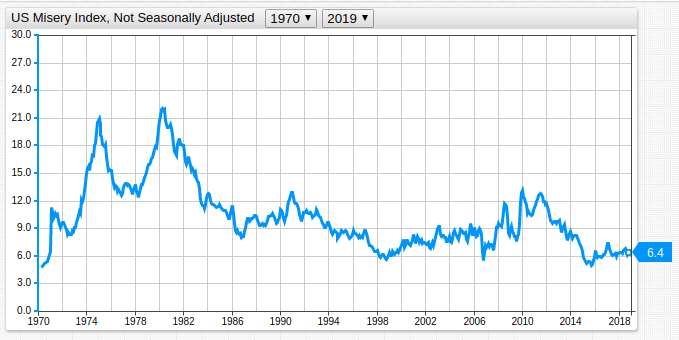 Use the drop-down lists in the widget header to navigate through time, for example, to observe the index value during the term of a specific president; expand the link below to see the Misery Index for the presidency of Barack Obama.