Published in 2015 by the National Bureau of Economic Research in Cambridge, Massachusetts, a paper entitled Measuring Economic Policy Uncertainty seeks to establish a set of clear guidelines for quantifying economic policy uncertainty with the following questions:

According to the authors (Baker, Bloom, and Davis), their EPU (Economic Policy Uncertainty) metric is able to accurately predict economic growth and investment by tracking geopolitical events such as international treaties, public information like newspapers and policy position releases, and actual actions undertaken by government bodies such as a central bank raising interest rates.

This box chart shows the range of the EPU index for each of the 4 regions. A wider range shows greater variance of index values, and the central box has may be modified to include any percentile values. According to the data, the People's Republic of China has seen the most volatile movements of their EPU Index, followed by the Eurozone, the Russian Federation, and the United States. Perhaps this is due to recent slow downs in the fixed assets and exports industry in China in recent years as the index reached its absolute maximum value within the last few years.

Tracking the EPU Index for the People's Republic of China alongside more concrete metrics can be used to examine the validity of the EPU Index. Shown below, the EPU is placed alongside real PRC Treasury Securities rates for the last decade and a half. The quarterly and bi-annual averages are compared in the same environment and a wtavg aggregation is used to smooth the occasionally volatile movement of both indices. Treasury Securities are a good tool for tracking economic potential and growth because they show the interest rates that businesses borrowing money are paying to their lenders. Historically speaking, a lower interest rate usually encourages business to borrow money and expand their operations.

The above figure is made using the weighted average aggregation. This tool may be used to creating a rolling average value for a specific time period. For more information about using this statistical tool, refer to Curve Smoothing Using Weighted Averages.

Using a time series chart with two axes, drastically different data may be compared side-by-side without significantly altering one dataset using a replace-value expression. In the visualization here, per capita GDP for the Russian Federation is compared alongside EPU index for the same period of time using axis expressions.

The left and right axis display different orders of value based on the axis setting. Open the Editor window in ChartLab to see the syntax for such expressions.

Dual axis visualizations are helpful for comparing data of different orders of magnitude. In the above case for example the per capita GDP value tracks quite closely to the annual average EPU Index value for the Russian Federation.

Election season is a notoriously uncertain economic time period for the United States, as elections have been known to represent dramatic changes in policy and personnel that reshape the face of American policy. Using the below SQL query to track the EPU Index during election years only, and comparing that data to the election results, it is expected that more contested elections generate a higher EPU Index.

The above query returns this result set:

Using public data from Encyclopaedia Britannica to track election results for the same period of time produces this visualization. 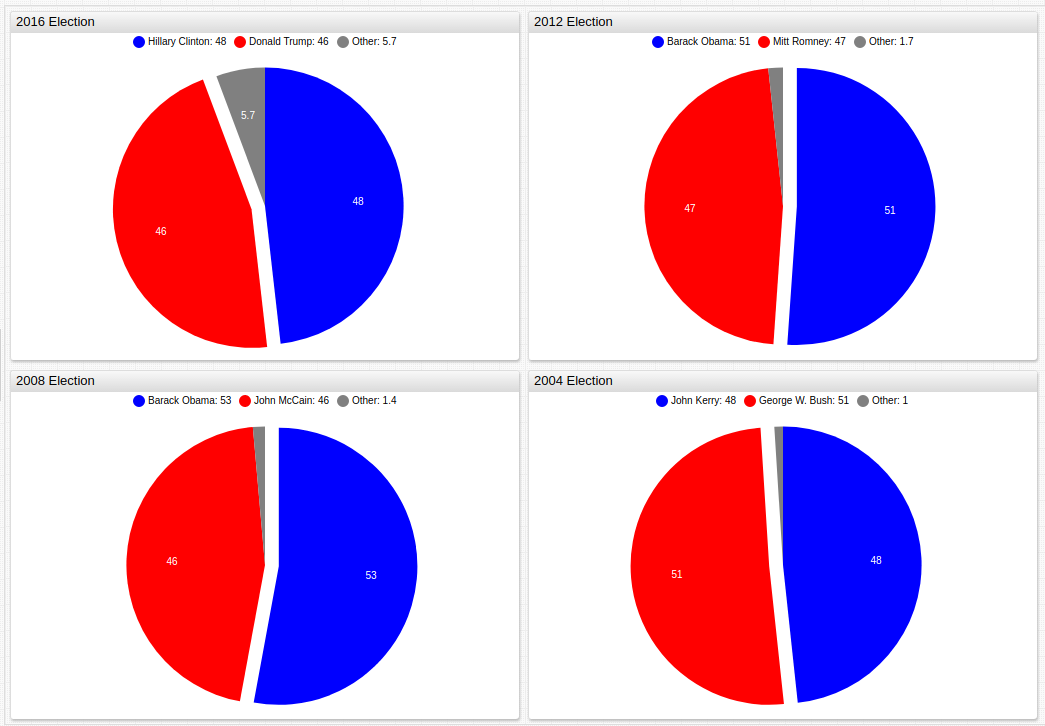 Historical election result data from recent U.S. presidential elections, the winning candidate has been separated from the remaining area using the expand setting. Open the ChartLab sandbox to view the complete figure.

Although the 2016 election is one of the more contentious in recent U.S. history, the EPU index immediately before the election is lower than the previous four elections.

The European debt crisis was a financial debacle inflamed by the P.I.G.S. countries (Portugal, Ireland, Greece, and Spain) coming dangerously close to defaulting on their outrageously high government debts. Tracking several events alongside the EPU index reflects the panic and uncertainty of the multi-year crisis, bailout, and recovery process. Using the following 7 events to chronicle the timeline:

The following SQL query returns the average value of the EPU index for the Eurozone for the period from 2002 until 2018 consolidates the information using a round expression.

The datetime column can be compared with literal dates specified in various date formats including ISO 8601 and short dates such as yyyy-MM.

This query returns a single-entry table:

The next query targets the months of each of the events above and can be compared to the index value from the birth of the Euro to the periods including the crisis, bailout, and eventual recovery.

Multiple datetime values can be conveniently enumerated as a list using an IN expression. The above query returns these values for each of the targeted months:

Further querying the data to show the top seven entries for the period from January 2002 to July 2014 using this query:

This query shows that none of the expected entries appear among the greatest EPU index values during the examined time period in descending order using an ORDER BY expression in the WHERE clause.

Tracking both results on a Time Chart to compare the expected versus actual results:

As expected the EPU Index is much stronger as a metric that tracks changes across broader periods of time than responding to specific events, evidenced by the inability of the index to respond to major events such as those predicted in the Eurozone demonstrations. However, it is quite a strong predictor of broad periods of time, when the vast number of factors considered by the economists who designed the index may be compiled together and averaged for longer spans.

Using SQL queries and visualization tools, predictive algorithms and compiled indices may be quickly evaluated against actual data to confirm their validity and evaluate their relative strengths and weaknesses.

Use the following tools to recreate any of the visualizations seen here.